Law stipulates level playing field for all eight contenders, but there’s little doubt who is going to win.

Law stipulates level playing field for all eight contenders, but there’s little doubt who is going to win. 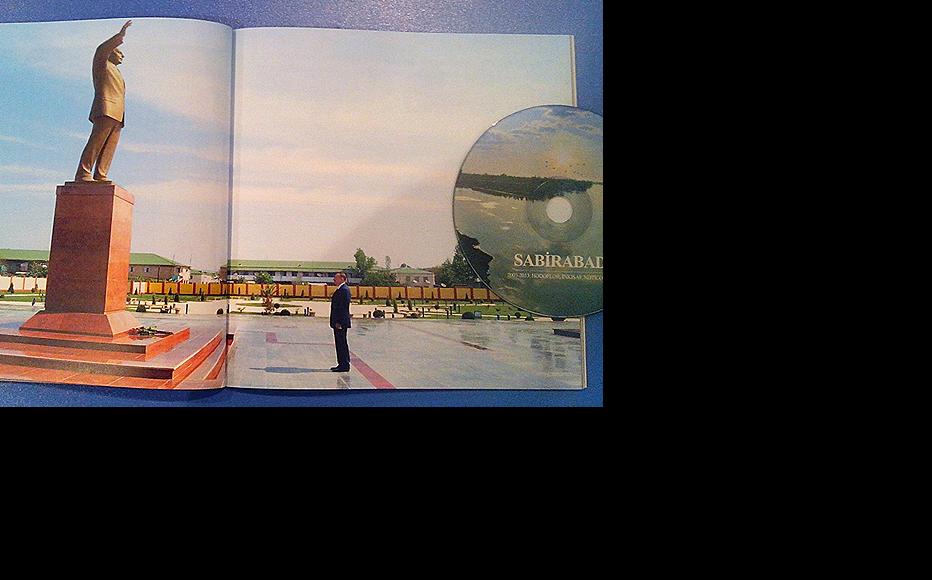 Pamplet handed out to schoolchildren in Sabirabad, Azerbaijan. It shows President Ilham Aliyev by a monument to his late father Heydar Aliyev, who preceded him as head of state. (Photo: Azer Ismayil)
The link has been copied

Campaigning for Azerbaijan’s presidential election has only just begun, but the government and opposition are already accusing one another of breaking the rules.

The campaign officially began on September 16. That was also the first day of the new school year, and children were greeted with lessons in “patriotism”, which focused largely on President Ilham Aliyev, who is running for re-election on October 9. Schoolchildren also received books, pamphlets and DVDs about him.

“I don’t understand why my child got campaign materials on the first day of school,” Farida Qasimova, whose child is in the third grade at a Baku school, said. “Schools shouldn’t be used for campaigning, particularly when the lesson is called “patriotism”. Since when has patriotism got something to do with the president?”

Azer Ismayil, a Russian-language teacher in Sabirabad, a town in central Azerbaijan, confirmed that the material had not just been handed out in the capital.

“In our school all the children received pamphlets with pictures of the president, taken when he visited to Sabirabad. As far as I know, this wasn’t just at our school. All the schools in Sabirabad handed out these pamphlets,” he said.

A spokesman for the education ministry said that since the post of president was a component of statehood, it was entirely natural for children to receive pictures of him during patriotism lessons.

Ali Karimli, head of the Popular Front, one of the opposition parties that have united behind a joint candidate, Jamil Hasanli, said this was outrageous.

“There should be no campaigning in schools. Apart from that, it was the economy ministry that published the pamphlets given out in the Baku schools. That means the state budget is financing Ilham Aliyev’s campaign. It’s a gross violation of the law, and we intend to appeal to the electoral commission,” he said.

Lawyer Elman Fattah agreed that leafleting in schools was in breach of the law.

“Firstly, schools are places where it is illegal to campaign. Secondly, the majority of polling stations are located in schools, and the school principal is made head of the polling station. That means that during the electoral period they have to be neutral and not campaign for any candidate,” he said. “Thirdly, it is now the 2013-14 school year, and it isn’t clear who will be president [after October]. Yet they’ve given the children materials in which Ilham Aliyev is presented as president.”

Aliyev’s Yeni Azerbaijan party had allegations of its own against the opposition. Siyavush Novruzov, its deputy executive secretary, told the APA news agency that the party intended to file a complaint with the electoral authorities claiming that Hasanli had conducted campaigning before the official period started.

“Azadliq has not applied to the electoral commission, and has not registered as a media outlet that will accept paid campaign materials. It Therefore does not have a right to support any particular candidate,” he said.

Rahim Hajiyev, the paper’s acting editor-in-chief, said the pieces to which Novruzov was referring were just normal articles, not campaign material.

“We are not campaigning for candidates; we are just providing information. Those are different things,” he said. “And Yeni Azerbaijan can’t accuse anyone else of breaking a law which it’s breaking itself every step of the way.”

In total, eight candidates are standing, besides Aliyev and Hasanli. They include five members of parliament who are all broadly pro-government – Zahid Oruj of the Homeland party; Iqbal Agazade of the Hope party; Ilyas Ismayilov of the Fairness party; Faraj Quliyev of the National Renaissance movement; and Qudrat Hasanquliyev, of the United National Front of the Azerbaijan.

By law, all the candidates can advertise their campaigns free of charge on state television and in government-owned newspapers. They can also pay for adverts in the private media.

Elman Nasirov, head of the State Governance Academy’s Institute of Political Studies, is in no doubt that President Aliyev is only candidate with any chance of success.

“The people of Azerbaijan support his domestic and foreign policies. I have no doubt that this time, voters will choose economic development and the successful policies for which Ilham Aliyev stands,” he said.

Huseynbala Salimov, an analyst with RFE/RL radio, agreed that Aliyev would win, but said it would only happen through massive electoral fraud.

“I don’t believe this election will be democratic. If the election were fair, then the joint opposition candidate, Jamil Hasanli, would defeat Ilham Aliyev by a large margin, because the two main opposition parties – Musavat and the Popular Front – support him,” he said. “In any case, none of the other candidates will get one per cent of the vote.”

Samira Ahmedbeyli is an IWPR reporter in Azerbaijan.

Azerbaijan
Elections
Connect with us