IWPR’s country director had book confiscated just because it was published in Armenia.

IWPR’s country director had book confiscated just because it was published in Armenia. 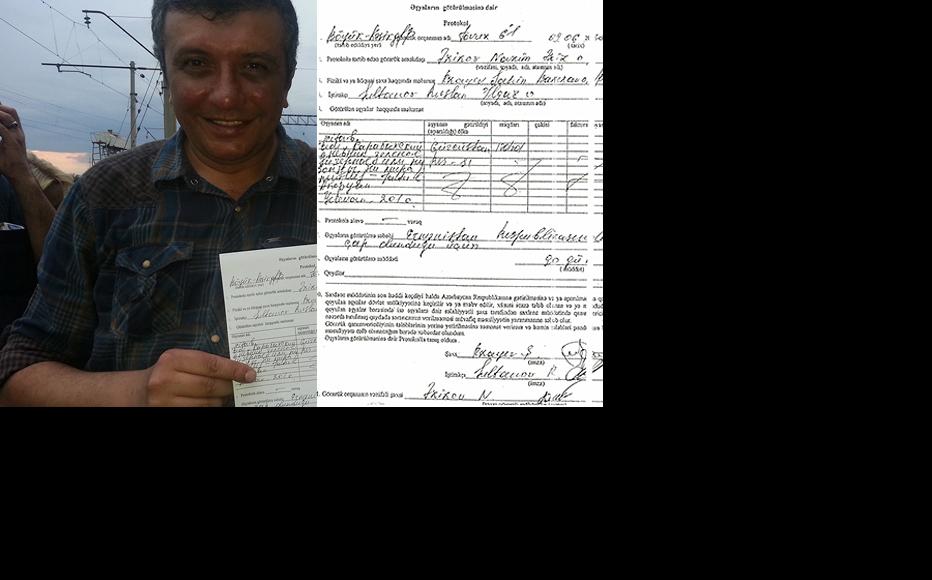 Shahin Rzayev with the receipt for the confiscated book. (Courtesy of Shahin Rzayev.)
The link has been copied

The frontier guard sounded almost exultant when he discovered the book in my luggage.

“You’re importing extremist literature,” he said, holding the offending item under my nose.

It was June 9, and I was at the Boyuk-Kesik border crossing, on the train back from Georgia to my own country, Azerbaijan.

I had just been in the Georgian capital Tbilisi for a seminar organised by the Conciliation Resources group, which was making a film about the Nagorny Karabakh war. At the event, I met an Armenian writer called Tatul Hakobyan, who had just launched his new book, “Armenians and Turks”. I took the opportunity to buy this book as well as his previous work, “Karabakh Diary, Green and Black”.

Annoyed that a book should be branded extremist just because they it was written by someone from Armenia, I produced my press card and demanded to see the unit commander.

“Why have you decided that the book is extremist when you haven’t even read it?” I asked the officer, Nazim Azizov.

He replied, “The whole world knows that the Armenians are waging a propaganda war against us.”

I countered, “Well, if that’s the case, don’t we have to study their propaganda so as to counteract it? How can we respond if we don’t read what they’re writing?”

Azizov said he was just following orders, and that his superior had told him what to do by phone.

At this, I got off the train and went along the platform to the frontier guards’ office. There was only one other traveller in a similar fix, a man trying to import more fruit than is legally allowed into Azerbaijan.

As I argued my case in the office, I told the border guards that I regularly collaborated with journalists from Armenia and had done so for more than a decade. I had even had a meeting, together with a group of Armenian journalists, with the late president Heydar Aliyev, whose son Ilham now rules the country.

None of this made any impression on the border guards, and they handed me a chit to sign, although they did change “extremist literature” to “published in the Republic of Armenia” as the reason for confiscation.

However, this new reason raised as many questions as it answered.

“What if I tried to import a Yerevan edition of Pushkin’s Yevgeny Onegin?” I asked. “Would you confiscate that, too?”

Azizov replied, “We’ll make that decision when you import it.”

Back in Baku, I asked lawyer Rashid Hajili, director of the Media Law Institute, what he made of the incident.

Hajili said it was a case of censorship, and a breach of citizens’ right to obtain and distribute information. He explained that even books that are subject to a legal ban could still be imported as long as they were single copies for personal use.

Furthermore, he said, customs officers did not have the right to take this kind of decision by themselves.

“A ban on distributing any kind of literature, even when the aim is to prevent extremist propaganda, can only be issued by a court,” the lawyer explained. “In any case, such decisions prohibit only mass distribution, not single copies.”

I have brought Armenian goods – books, drinks and cigarettes – into Azerbaijan on many occasions. I have also been to Armenia seven times and interviewed leading politicians there. Never before have I run into this kind of problem.

The reason why tighter rules are being imposed on importing print materials probably has a lot to do with the approach of the presidential election in Azerbaijan, due on October 16 this year. Yet in the internet age, regulations of this kind make absolutely no sense. They will not make any difference at all, except to stop me reading a book I wanted to read.

Azerbaijan, Armenia
Media
Connect with us