Islam is on the rise in the oil-rich, secular South Caucasus country and the hijab is a way to make a statement. 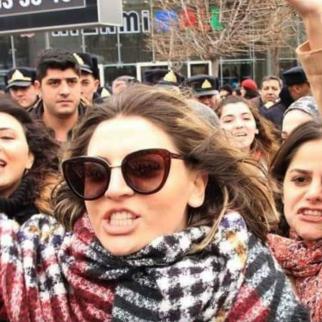 Narmin Shahmarzadeh, a psychologist and activist, at a women's rights rally in Azerbaijan. © N. Shahmarzade

Islam is on the rise in the oil-rich, secular South Caucasus country and the hijab is a way to make a statement. 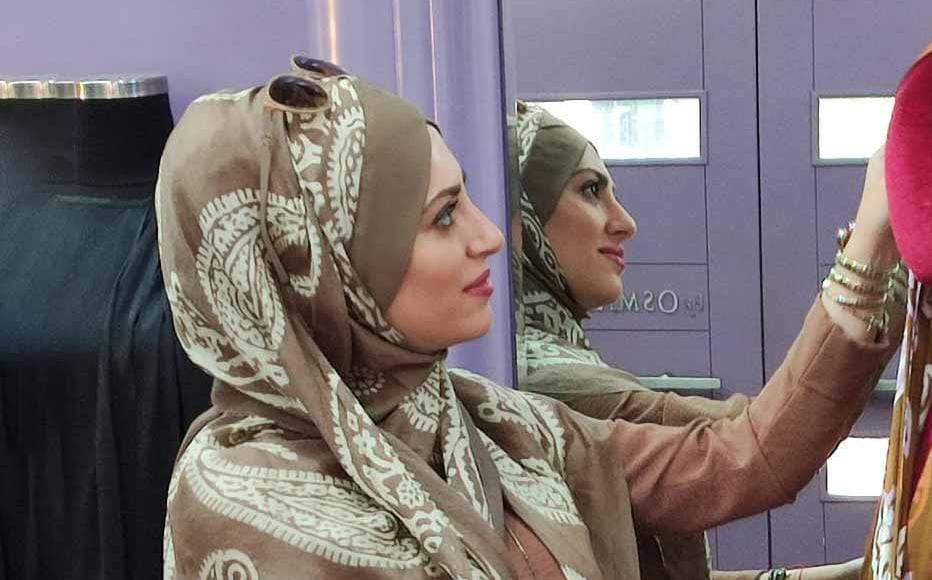 Ayten Osmanova arranges a colourful hijab in her atelier in Azerbaijan's capital Baku. The designer started her fashion business to cater for the increasing number of liberal believers who, like her, sought a modest apparel with a modern, colourful twist. © Lamyia Adilgizi
The link has been copied

In 2014, when she decided to wear the hijab, Ayten Osmanova experienced what she describes as “extreme difficulties” in finding fashionable outfits.

“There was nothing in terms of Islamic fashion back then,” Osmanova told IWPR. “I was going to Zara and other boutiques but everything there was still designed for the mainstream secular population of Baku, such as tops with no or short sleeves, and it was basically impossible to adjust them to the hijab.”

With no prior experience in fashion, the business graduate from Azerbaijan’s economics university decided to start designing what she personally wanted to wear and was not available in Baku’s clothing shops.

In her little atelier in Yasamal, Baku’s most conservative neighborhood, Osmanova points to a range of kelagais, a traditional Azerbaijani scarf that she has adapted into hijabs. These stylish headscarves allow observant Azerbaijani women to wear fashionable, colourful Islamic outfits, she noted, adding that were different to both the Turkish-style plain tunic and scarf and the black robe-like dress with white strip around the face and neck that many wear in Iran.

Osmanova said that her gamble to fill what she felt was a gap had paid off, as her designs had taken her to catwalks in Azerbaijan and abroad.

Its constitution clearly spells out that Azerbaijan is a secular state, while also ensuring freedom of religion. Interest in Islam is on the rise among Azerbaijan’s majority Shi’a Muslim population of 9.7 million, an attempt, sociologists note, to fill the ideological void left by the Soviet Union’s collapse.

Though women dressed in head-to-toe black are rare, headscarves are an increasingly common sight in the capital as well as in the regions.

“Thirty years ago, it was impossible to see an Azerbaijani woman wearing a hijab,” 57-year-old Baku resident Shahla Aliyeva told IWPR. “The hijab is not just a simple piece of cloth but part of Islamic morality. Now we are getting back to something our ancestors entrusted to us.”

The USSR considered the hijab a sign of oppression: in Baku in the 1960s, Soviet authorities erected the statue of a woman throwing off her veil, which remains a unique sight in a largely Muslim city.

Veiling has become increasingly common among middle and lower-class people in the border provinces with Iran and Russia’s Dagestan region as well as in cities such as Baku and Sumgait.

“I have been praying since I was 19, but I didn’t wear the hijab as I was afraid of being ugly and invisible,” 37 year-old Aygul Mammadova, who models hijab fashion in Baku, told IWPR. “Later on, I switched to the headscarf and now I can’t imagine myself without it.”

In secular Azerbaijani society, the headscarf not only represents a religious ideology but conveys modesty, humility and piety, explained Kamal Gasimov, a doctoral candidate in Middle East studies at the University of Michigan.

Although the main purpose of veiling was to cover up a woman’s body, which in Islam should not be seen in public, individual interpretations in Azerbaijan still vary.

For conservatives, who are in the minority, fashion is trivial and clothes should be modest; women wear a head-to-toe, dark coloured, loose-fitting chador, similar to neighbouring Iran. Azerbaijan has the world’s second highest proportion of Shi’a Muslim after Iran.

They consider that bright, stylish clothes can also be halal, admissible, in Islam. Elastic caps, worn under hijabs to cover the hairline, can also cover the chin or feature a collar, an overlap or a double overlap.

“As a woman I choose to wear [clothes] the way I want, unless it does not violate the basics,” said 20-year-old Rugeyya Isali, a vocalist and a student at the Azerbaijan Technical University.

Wearing a sporty, bright outfit and a wrap around her head, with her neck uncovered and stylish earrings hanging from her partly visible ears, she said that there was not one certain hijab rule in the Koran.

“I want my hair to be this way and no one has a right to give me a black look, as if I am doing anything odd,” she continued.

The revival of veiling began back in the 1970s and 1980s, a period during which politically active Islamic social movements grew in many Muslim countries in response to the failed policies of secular and authoritarian regimes.

There are a variety of reasons to embrace the headscarf.

“The hijab allows Muslim women to protect themselves and gain more mobility in public spaces, which are usually dominated by men,” Gasimov told IWPR. “Many Muslim women say that it protects them from unwanted attention and sexual harassment.”

One 29-year-old woman, wearing a black jacket and black headscarf on top of loose jeans, told IWPR that she adopted the hijab after losing her husband to cancer.

“I would also like to wear colourful dresses and headscarves, but I can’t, since people will look behind me and say that as if I want to get remarried,” she explained, asking to remain anonymous. “I want to have a quiet life with my two kids rather than being stigmatised by other people around, which destroys me mentally.”

There is an unofficial ban on wearing the hijab in government jobs, while private employers have a range of attitudes towards the veil.

“I have to survive in this society," said Aygul Dadashova, a 38-year-old education specialist, wearing a modest purple tunic. “It is not easy for veiling women to find their place in a professional working environment that is dominated by non-religious people in Baku.”

However, Zaur Mammadov, a local shop owner in the capital’s Akhmadli district, told IWPR that as a trader he prefered to have covered female employees, as he found them “more trustworthy and reliable”.

THE RISE OF RELIGION

Sociologist Sanubar Heydarova noted that religion often fills a gap when education, science and the rule of law fail and the state loses its power.

“People need a power that gives them a sense of confidence and security. When there is injustice, the state needs to be there to address it easily and fairly for its citizens. Unfortunately, this is not happening in Azerbaijan,” she said, arguing htat this left religion as “an alternative power for the nation."

In that context, the hijab allowed “women to express their protest against injustices…and the forms of secularism and nationalism promoted by the local elites, in violation of the rights of believers,” Gasimov told IWPR.

Seen as a threat, the government has treated conservative Islam with a mix of tolerance and coercion. In 2011, authorities instituted a ban on headscarves in school, claiming that it was in line with the existing law on school uniforms. Those who were vocally against the ban were arrested. In 2016, a clampdown on the religiously conservative town of Nardaran, about 30 kilometres from the capital Baku, led to scores of arrests.

Suppression can be counter-productive, maintained Heydarova. “Jailing religious people does nothing but increase their supporters among the common people,” she concluded.

With their colorful, stylish headscarves and outfits, designers are playing a role too. “Even uncovered women approach me downtown and ask me about my hijab, whether it is hard to wear it in summer and how I preferred wearing it,” Osmanova said.

“These colours and models not only make our hijabi women happy but also attract other women to switch to the veil,” she continued. “I think this is the right approach to invite others to Islam, as we are doing it in a beautiful way, with love rather than with force.