Locals warn that the clear demarcation of Armenian-Azerbaijani territory is key to their security. 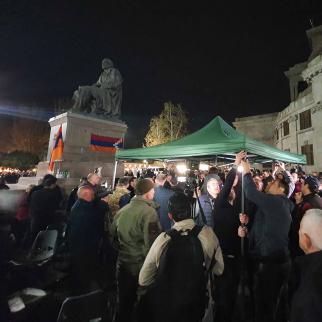 A recent protest in Yerevan against the government's changing stance on Karabakh. © Arshaluis Mghdesyan

Locals warn that the clear demarcation of Armenian-Azerbaijani territory is key to their security. 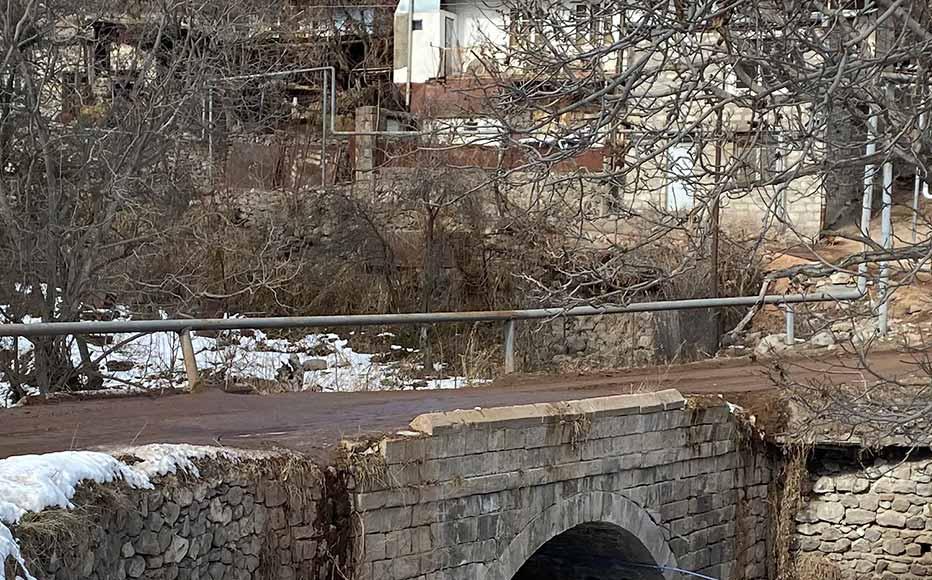 A view of Khnatsakh. Animal husbandry is the main occupation of its 820 residents, who now struggles to find pastures and grassland. Since the 2020 war, the village lost access to about 22 hectares of land. © Gayane Mkrtchyan 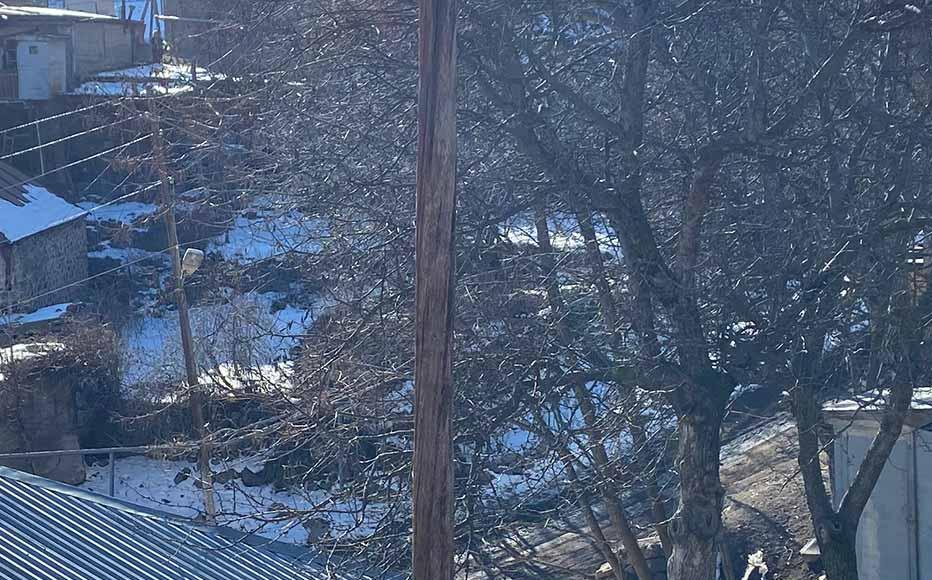 A view of Khoznavar, a border village surrounded by Azerbaijani-controlled hills on three sides. The village is connected to Armenian-controlled territory by a single, pothloed road. © Gayane Mkrtchyan 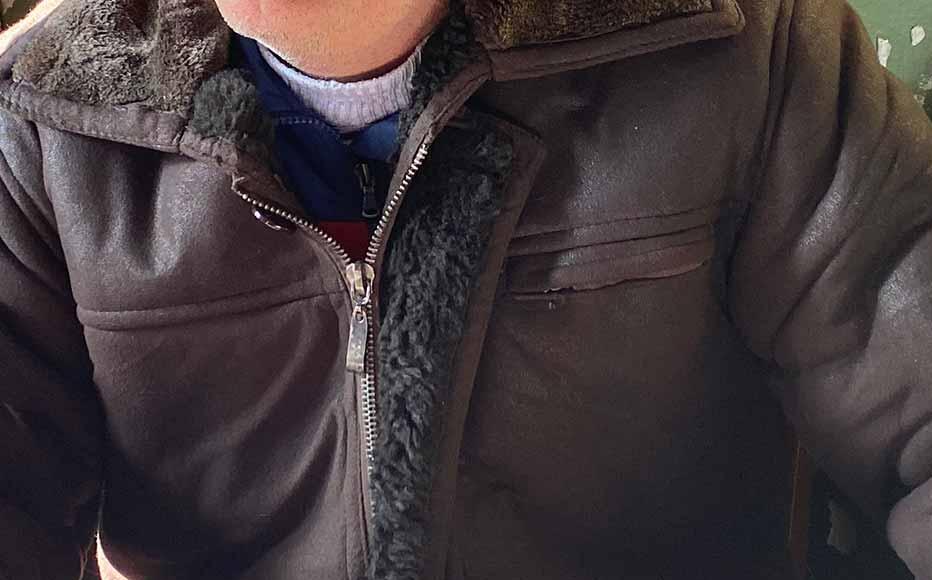 Vahan Zakyan is Khoznavar's head. He said that villagers "live in fear to get too close to the border. It is extremely important to have a security zone, otherwise how long our villages can live in such a situation?" © Gayane Mkrtchyan 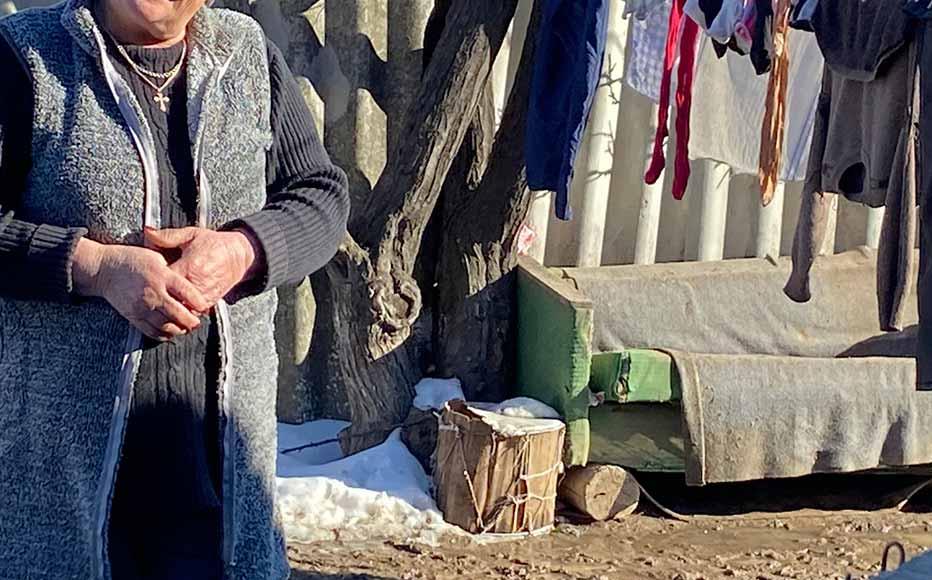 Karine Asryan, 60, in the courtyard of her house in Aravus, Her family used to run a livestock farm but since the end of the 2020 war between Armenia and Azerbaijan they lost access to pastures and grassland. Now they own only three cows. © Gayane Mkrtchyan 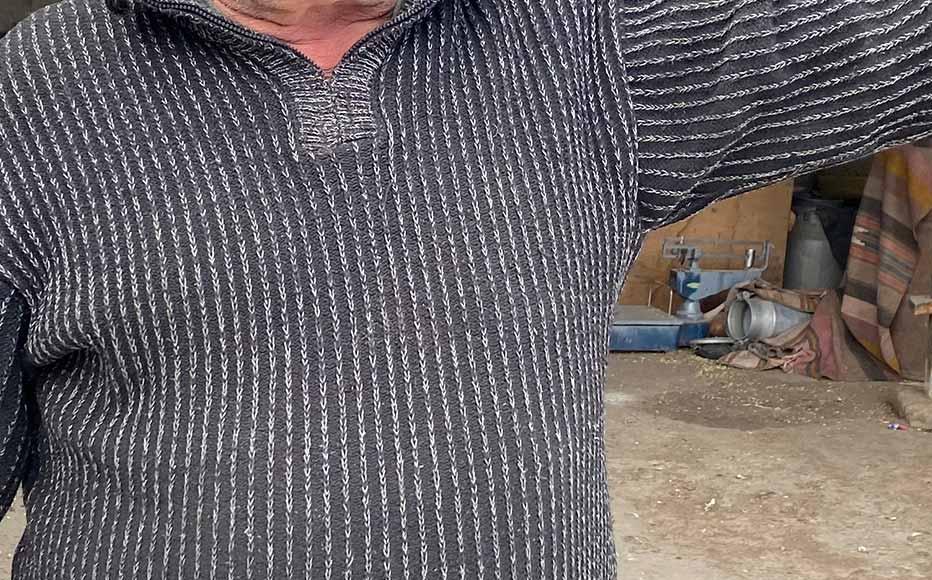 Serob Adamyan, 67, lives in Khnatsakh. He can see both the Armenian and Azerbaijani flags from his balcony. "Sometimes we hear shootng at night. I can't say they are shooting in the direction of the village, but people are frightened." © Gayane Mkrtchyan
The link has been copied

Since the end of the autumn 2020 war over Nagorny Karabakh, the Armenian village of Khoznavar has effectively become a peninsula. The village in the country’s southernmost region of Syunik sits on the border with Azerbaijan and hills surrounding it on three sides are dotted with Azerbaijani military posts. An exposed and potholed road links the village of 350 people to Armenian territory; residents call it “the path to life”.

“This road is our connection to the outside world,” Vahan Zakyan, head of the Khoznavar administrative district, told IWPR. “There are Armenian military positions too, but if the situations worsens, we will collapse. Our right to live safely has been violated.”

Residents of border villages like Khoznavar have been calling on the government for months to establish a buffer zone, citing security concerns.

Since the end of the autumn 2020 war over Karabakh, an Armenian-populated region in Azerbaijan, some districts have fallen under the control of the Azerbaijani army.

In May 2021, Yerevan stated that Azerbaijan’s troops had advanced more than three kilometres into southern Armenia in what Pashinyan said it was an attempt to “lay siege” to Lake SevLich (Black Lake), shared by the two countries. He labelled it “an encroachment on the sovereign territory of the Republic of Armenia”.
On May 22, Armenia’s prime minister Nikol Pashinyan and Azerbaijan’s president Ilham Aliyev, with the mediation of European Council head Charles Michel, agreed to start the work of the ad-hoc joint commission on border demarcation and security. The first meeting was held on May 24.

Animal husbandry is the area’s main occupation and villagers used to take their livestock to nearby pastures in Karabakh-adjacent districts like Lanchin and Kashatagh as they were under the control of the Armenian army. Now they are off limits.
“Azerbaijanis seized hundreds of acres of land belonging to the community. We used to mow grass mainly in these areas, but now Azerbaijanis do not allow us to mow it. We brought a lot of hay from there, near the lake,” Zakyan explained, pointing towards Lake Sev Lich.

Locals have significantly reduced their flocks, but there is little grass to graze on.

“We live in fear of getting too close to the border… it is extremely important to have a security zone, otherwise how long can our villages live in such a situation?” Zakyan said.

School principal Volodya Zakharyan told IWPR that teachers for the 38 pupils travel every day from the regional centre of Goris to Khoznavar.

“It is the only hope for the village,” she said.

In the border village of Khnatsakh, 14 kilometres away, Serob Adamyan can see Armenian and Azerbaijani flags on opposite military posts.

“Houses are 100-200 metres from the posts,” the 67-year-old told IWPR. “This is how close the border has crawled to us. No one leaves the house after sunset. Sometimes we hear shootings at night, I can’t say that they are shooting in the direction of the village, but people are frightened.”

The military posts are so close to each other that any gesture risks being seen as a provocation.

“People are depressed…  The Azerbaijanis took my cousin’s cattle; with the mediation of the Russians, they returned seven cows, but kept left one cow for themselves. A horse was tied up by a house and was taken [by them] too. There are many plenty of such incidents,” resident Argam Lalayan told IWPR.

“Living in such conditions is not easy, we need a safety zone,” Khnatsakh head Seyran Mirzoyan told IWPR. “We do not let the children out in the evenings. It is risky to go out after dark. Many people leave their gardens uncultivated, because they are right next to Azerbaijani posts, so people are afraid to work [on them]… People are forced to sell livestock.” He added that about 22 hectares of the village’s land had fallen under Azerbaijani control.

On February 9, Pashinyan told parliament about a possible “mirror withdrawal of troops… from Armenian-Azerbaijani border at an equal distance, after which border protection will be handled by a limited contingent of border troops”.

The proposal was widely criticised. Rights groups and opposition politicians, like former defence minister Seyran Ohanyan, asked the government to disclose specific details about what the “mirror withdrawal of troops” meant for Armenia’s territorial integrity, considering the advance of May 2021.

In March 2021 Armenia’s Ombudsman Arman Tatoyan stated that a security zone around the Syunik region was essential “to guarantee the protection of the rights of the citizens of Armenia. There must be no Azerbaijani soldiers, signs or flags near the villages and the rural roads in the Syunik region”.

Gayane Abrahamyan, who heads the NGO For Equal Rights Educational Centre, stressed that it was critical to protect citizens’ human rights and security.

“When we talk about a mirror withdrawal, this is, in fact, a retreat from our positions, and this is not a proportionate reciprocal step, since on May 12 Azerbaijani troops invaded Armenia’s sovereign territory,” the former member of parliament told IWPR. “It is extremely important to use all platforms to protect the rights of the citizens living in the border settlements. Even if the issues of their livelihood are resolved to a certain extent, these people constantly live under the threat of violation their right to life, not to mention the violation of other rights, and this should become imperative in our work with the international community.”

For the 40 families living in Aravus, a village about 23 kilometres east of Goris, insecurity is simply something they have learned to live with.

“We are a border-guard village and not a border village,” 60-year-old Karine Asryan explained. “We are scared, although we know that both the army and local men are guarding the borders. Nobody leaves the village, everyone is sitting tight.”

She recalled how, in spring 2021, her husband, a shepherd, was insulted and beaten by three armed Azerbaijani soldiers while he was with the cows in the fields, about 50 metres away from their positions. They left when Armenian soldiers intervened.

“A security zone is important,” she concluded.

In Khoznavar, Silvia Nersisyan, the village’s only medic, agrees.

"Imagine if they suddenly decide to close that road, we will find ourselves in a blockade,” she said. “They surround us, but we have nowhere else to go. This is our village, we will continue to live [here].”