Yerevan’s calls for assistance from the Russia-led security bloc have fallen on deaf ears.

Yerevan’s calls for assistance from the Russia-led security bloc have fallen on deaf ears. 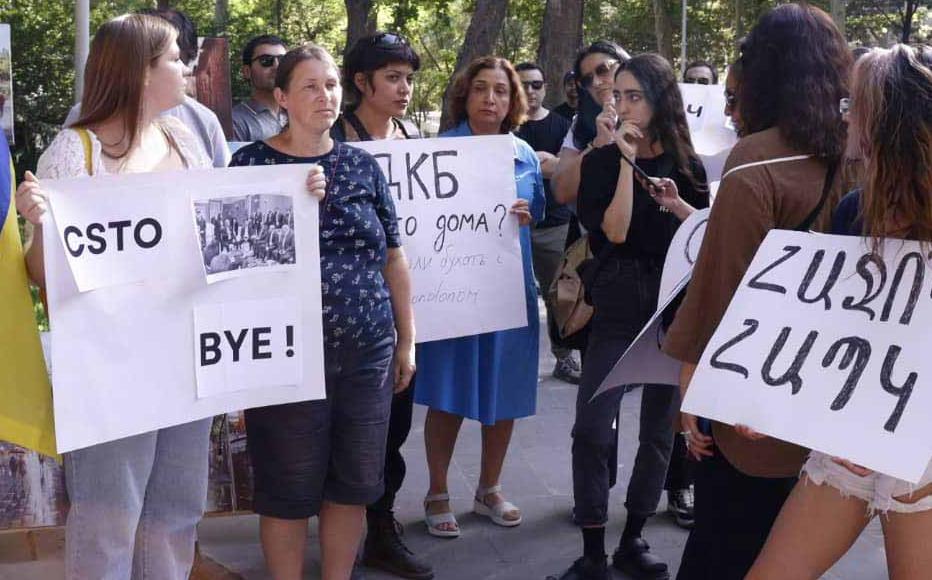 Armenians took to the street and asked the government to leave the Russia-led security bloc Collective Security Treaty Organisation (CSTO) after Yerevan’s calls for assistance in the wake of renewed fighting against Azerbaijan have fallen on deaf ears. © Ashaluis Mghdesyan
The link has been copied

Anger is mounting in Armenia at the refusal by the Collective Security Treaty Organisation (CSTO) to answer its plea for military aid following renewed fighting with Azerbaijan.

Prime minister Nikol Pashinyan, the CSTO’s current chair, turned to the Russia-led security alliance on September 14 in the wake of the deadliest fighting between Armenia and Azerbaijan since the 2020 war over the Armenian-populated Nagorny Karabakh region.

A fact-finding mission, led by the CSTO chief of the joint staff Anatoly Sidorov, arrived on September 15.

“Let's not get ahead of ourselves,” Sidorov said in a media briefing. “On September 13, the heads of our states unanimously declared that political and diplomatic methods should solve this problem that exists between Armenia and Azerbaijan.”

Zas’ delegation was met with public protests and calls for Armenia to withdraw from the security bloc.

Some politicians expressed open criticism, with parliament speaker Alen Simonyan branding the alliance a “gun that does not shoot”.

Fighting broke out on the Armenian-Azerbaijani border on September 12, resulting in nearly 300 dead over the next 48 hours. On September 13 Pashinyan initiated an extraordinary video session to call for military assistance as Yerevan accused Baku of attacking its sovereign territory. Azerbaijan stated that its forces reacted to Armenia’s “wide-scale provocation”.

On September 14, Pashinyan formally invoked the CSTO’s Article 4 for mutual defence, which is akin to NATO’s Article 5.

“The clause states that ‘if one of the States Parties is subjected to aggression by any state or group of states, then this will be considered as aggression against all States Parties to this Treaty’,” Armen Khachatryan, deputy chair of the parliamentary commission on defence and security, told IWPR. “In such a situation, which completely corresponds with the recent aggression of Azerbaijan against Armenia, it is necessary to activate, including the military mechanisms of the bloc.”

In its 30-year history, the bloc has exercised the collective security provision only once. In January 2022, in response to a call for military assistance by Kazak president Kassym-Jomart Tokayev "to help Kazakstan overcome this terrorist threat,” CSTO troops were deployed in a matter of hours.

In his speech to the UN general assembly on September 22, Pashinyan said that “the risk of new aggression from Azerbaijan remains very high”. In a clear reference to the lack of support from the CSTO, he added that “another reason for the escalation is the inadequate reaction of the regional security structures to the current situation, which raises serious questions in Armenian society”.

Officials lambasted the CSTO’s political and diplomatic mechanism as a tool to de-escalate the situation on the border.

“Armenia is expecting clear actions from the CSTO on the restoration of the territorial integrity of Armenia, [which] is a member state of the CSTO, as well on preventing new escalations," deputy minister of foreign affairs Vahe Gevorkyan said at a meeting with the Zas delegation.

Armen Grigoryan, the secretary of Armenia’s security council, put it more bluntly. “There is no more hope for CSTO,” he said.

Some experts maintained that Yerevan should exit the bloc and deepen ties with the US. In contrast with the CSTO’s guarded statements, US house speaker Nancy Pelosi, who visited Yerevan on September 17, said that she was there “to understand what Armenia needs”.

“CSTO, is there anybody home?”

Others see Pelosi’s comments as intended to attract the votes of the influential Armenian diaspora ahead of the ballot for the US congress in November.

For political scientist Areg Galstyan, the CSTO was “clearly not a security system for Armenia.”

“Russia also does not react to Azerbaijan's encroachments as it has its own interests,” he told IWPR. “[Moscow] wants Baku to achieve, by force, the opening of the so-called Zangezur Corridor to connect Azerbaijan to Nakhichevan [an enclave sandwiched between Armenia and Turkey] through the territory of Armenia.

According to the ceasefire agreement of November 9, 2020, Moscow must provide the security and basically take control of this communication route. This is huge leverage in the hands of the Kremlin.”

Yet despite the discontent, Yerevan has no real alternatives. The authorities know they need to see the CSTO proposals on reducing the border escalation.

“We are waiting for the results,” Khachatryan, a lawmaker with the ruling Civic Contract party, told IWPR.

“Yes, the CSTO is not perfect and not the best security system, but unfortunately, Armenia has nothing else. Leaving the CSTO can only aggravate the problems and create a security vacuum," Armen Ashotyan, vice-chairman of the Republican Party’s I have Honour faction, explained to IWPR.

Political scientist Alexander Iskandaryan maintained that withdrawing from the CSTO would trigger a change in Yerevan’s relations with Moscow.

"This will seriously deteriorate the security landscape around Armenia,” he continued. “There is no alternative system visible on the horizon. It is necessary not to seek security from outside, but to increase Armenia’s capacity as a state, to restore the army, to strengthen defence capability.”

Public opinion is less patient. Rallies calling for the government to exit the CSTO have been held in Yerevan with protesters carrying placards with slogans reading “CSTO, where is your security?” or “CSTO, is there anybody home?” among others.

"We are protesting against the inactivity of this organisation, which does not react to the aggression of Azerbaijan,” 25-year-old Nvard told IWPR during a demonstration in Yerevan. “The CSTO did not even condemn the attack of the Azerbaijani military. After that, how can we say that it is our ally?”