Women’s Resource Centre becomes target of abuse even though it wasn’t actually involved in drafting a gender equality law hated by conservatives.

Women’s Resource Centre becomes target of abuse even though it wasn’t actually involved in drafting a gender equality law hated by conservatives. 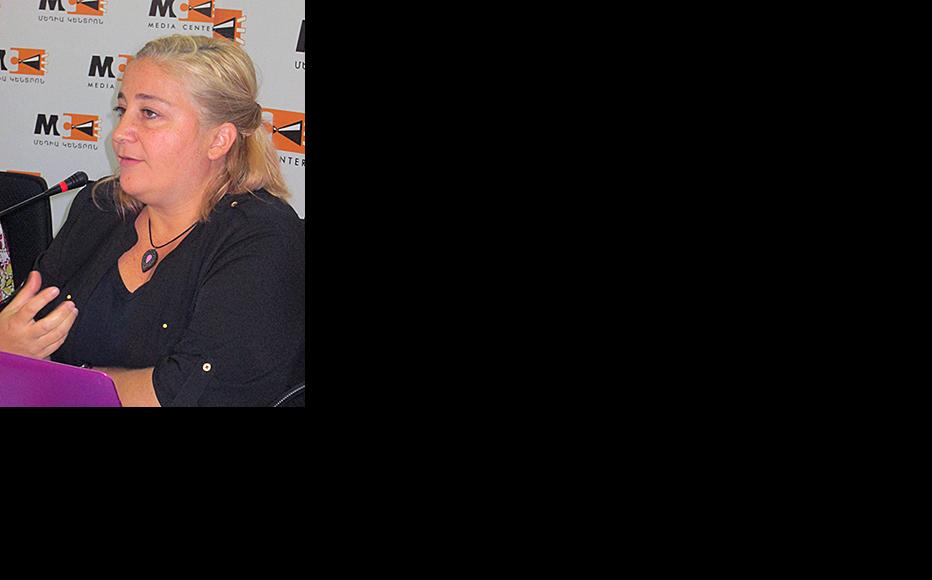 The Women’s Resource Centre, founded in 2003 to campaign for reproductive and sexual health, to combat rape and to improve women’s position in society, has received a number of threatening messages.

The centre’s director Lara Aharonian has asked the police to look into the threats, which included Facebook comments like “We need to blow up this Women’s Resource Nest”, and “We’ll slit your throats”.

“We’ve received abuse before and haven’t paid it much attention,” Aharonian told IWPR. However, we’ve recently become the target of specific threats, and we are particularly alarmed by statements threatening to blow up the organisation.”

Threats of this kind have been taken seriously by civil society groups like Aharonian’s since last year, when a gay-friendly club called DIY was attacked and burned down.

At the time, DIY club director Armine Oganesova, said she had repeatedly reported earlier threats, but police had ignored them.

After the arson attack, Oganesova left Armenia and received asylum in Sweden.

The Women’s Rights Centre has won support from 30 NGOs working on rights issues, which have urged the police to track down those behind the threats.

Nvard Piliposyan, a lawyer for the Women’s Rights Centre, noted that while “hate speech is a concept used in international law and in many countries, it has no legal force in Armenia, although Article 47 of the Constitution does bar the use of rights and freedoms to spread ethnic, racial or religious hatred”.

Aharonian says threats to the Women’s Resource Centre escalated after parliament passed a law enshrining equal rights for men and women. The use of the term “gender” in the law enraged conservatives who warned that it might encourage homosexuality and undermine traditional family values. (See Storm Over "Gender" Word in Armenia.)

Aharonian pointed out that although she supports the law and believes it will benefit the country, the Women’s Resource Centre had nothing to do drafting it. Instead, she said, conservative activists seized on her organisation as a convenient target.

“The recently-formed All-Armenian Parents’ Committee, whose entire activity is based around an incorrect interpretation of the word “gender” and on spreading hatred, has created the atmosphere in which these threats are being made,” she said.

Arman Boshyan, one of the leaders of the Parents’ Committee, which was set up in July, denied any involvement in intimidation or violence.

“We are not so stupid as to make threats. We are fighting for peace and happiness,” he said. “They say they’ve received threats. I’ve been asking them for the last month to send us an electronic copy of these threats, but I haven’t received anything yet,” he said.

Turning to the Women’s Resource Centre, he said it was responsible for a leaflet called “Let’s Talk about Sex”, which provides reproductive health information for women aged 18-plus.

“It’s supposed to be for health purposes but when I showed it to a doctor, he said that in fact the suggestions could actually contribute to a reader getting an infection,” Boshyan said.

The leaflet has provoked hostility from conservative-minded Armenians ever since it came out in 2008. They include Hayk Babukhanyan, a member of parliament from the governing Republican Party, who even tried to get state prosecutors to seek a ban on the grounds that the sexual health information was pornographic.

Aharonian noted that Babukhanyan has regularly called for the Women’s Resource Centre to be closed.

Last year, her centre won a libel case against one of the publications owned by the Iravnuk Media group, which belongs to Babukhanyan.

Despite that victory, she says her staff are still subjected to harassment and misinformation by parts of the media.

Anna Nikoghosyan, programme manager for the NGO Society Without Violence, said women’s rights groups did an essential job in Armenia.

“Women’s organisations have existed in Armenia for close to 15 years now, and they have helped tens of thousands of women and girls. These organisations have often assumed the duties and functions of the state, compensating for the authorities’ shortcomings on women’s rights, such as setting up phone hotlines and rapid-response teams for domestic and sexual violence,”

Last year, she said, women’s rights organisations took 3,300 phone calls and responded to about 850 cases of sexual or domestic violence.

Gohar Abrahamyan is a reporter for ArmeniaNow.com.

Armenia
Women's rights
Connect with us