Officials argue that that political and security issues trump any economic consequences. A soldier inspects the remains of a downed Azeri drone on the outskirts of Askeran on October 13, 2020 in Nagorno-Karabakh. (Photo: Alex McBride/Getty Images)

UAVs a Gamechanger in Karabakh

The scale of hostilities, including the use of precision-guided weapons, has already exceeded previous escalations.

Officials argue that that political and security issues trump any economic consequences. 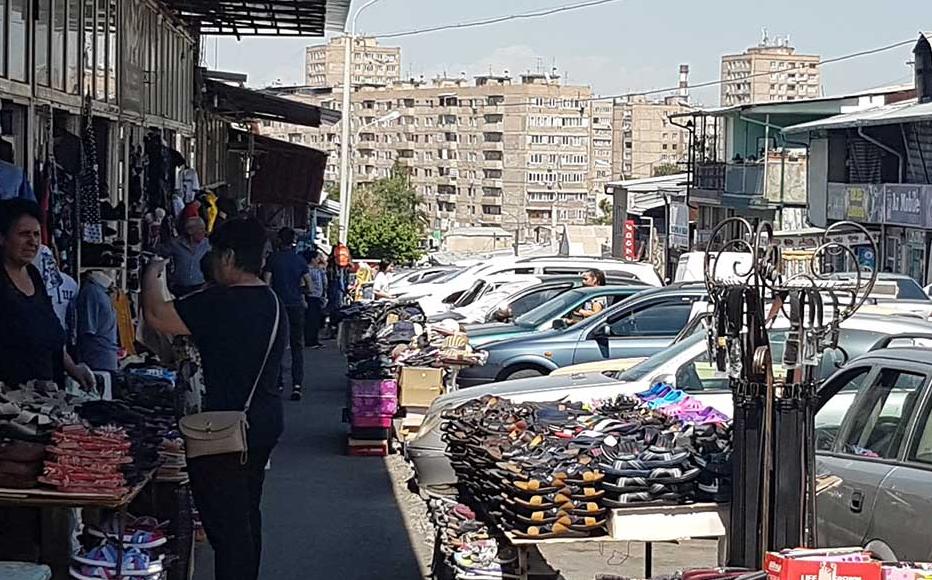 Yerevan's marketplace known as Bangladesh. © IWPR/Gayane Mkrtchyan
The link has been copied

Nune Karapetyan has been selling clothes at Yerevan’s Bangladesh market for more than a decade. Until recently, she relied on Turkish goods imported through contacts she had established there over many years.

All this changed with the ban Armenia imposed on importing Turkish goods following the conflict in Nagorny Karabakh last autumn, in which Ankara actively supported the Azerbaijani side.

“It's been six months already, and I, like many others, am no longer able to go to Turkey,” the 57-year-old trader said. “Of course, it is difficult to adjust and seek alternative markets, but we are trying. Income has declined, so did the choice. Now we mainly order goods from Moscow. In this regard, Turkey was much easier. The travel was cheaper and the goods were more affordable.”

The decree banned the import of ready-made goods of Turkish origin from January 1, 2021 for six months, a move Yerevan said was driven by security concerns.

“This decision will address product safety threats relating to Turkish goods, while, at the same time, put an end to the financial proceeds and fiscal revenues of a country with a clear hostile attitude,” the government said in a statement.

The government has already extended the ban, which covers up to 2,350 items including products of animal and vegetable origin, clothing and equipment, for an additional six months.

Azerbaijan’s intense use of combat drones purchased from Turkey and Israel were widely credited with changing the balance of power in the Karabakh conflict. Turkey was also alleged to have sent nearly 1,200 Syrian fighters to Karabakh to fight on behalf of Azerbaijan.

Artak Manukyan, a lawmaker from the ruling My Step faction, said that the economic consequences were less important than the political and security issues.

“Turkey’s aggression is mounting all over the world and it costs human lives,” he said. “Our economy must also lead in this fight so as not to contribute to the generation of funds that cost human lives and especially the lives of Armenian soldiers. We see that they are being shot by weapons made in Turkey.”

According to customs service data, Armenia imported more than 840 tonnes of goods from Turkey in 2020, out of which 80 were of ready-made products. In 2019, 268 million US dollars of goods were imported to Armenia from Turkey, a number that decreased to 230 million dollars in 2020.

Imports dropped sharply following the ban, with Turkish goods decreasing by 83 per cent in the first quarter of this year compared to the same period of 2020.

Naira Karapetyan, head of the department of the Eurasian Economic Union (EAEU) and foreign trade at the ministry of economy, said that most products from Turkey could be easily substituted.

“Studies indicate that ready-made goods of the same quality and variety can be imported from other countries, both EAEU or EU member-states, and others,” Karapetyan said.

Importers are trying to establish new contacts in Russia, Kyrgyzstan, Uzbekistan and China to find products that match Turkish goods not only in terms of price and quality, but also in design and style.

Karapetyan, the Yerevan market trader, said that the goods from Kyrgyzstan were too bright and gaudy for the Armenian market.

“Turkish clothes are stylish and our population is used to them,” she said. “The goods available in the markets of Kyrgyzstan and Uzbekistan are of different styles, and I will not order goods from these countries. Right now we are focusing on Moscow.”

Economist Artak Manukyan noted that although Turkish goods were particularly attractive to Armenian consumers due to their affordable price, Chinese products were also competitively priced.

“About 4,000 economic entities are involved in the business of importing goods from Turkey to Armenia, and they will have to face temporary difficulties,” Manukyan said.

Not all retailers have been able to transition from one market to another, however. Taguhi Saghatelyan was forced to turn her small clothing store in the city of Echmiadzin into a flower shop after she found new export sources too expensive.

“You need 10,000 or 15,000 dollars for China,” she explained. “I know some people who team up in four and share their investments in order to buy goods in bulk. I can’t do it. It was enough to have 2,000 dollars for Turkey and the travel costs were no more than 150 dollars. I understand the political meaning of this decision, it could not continue as usual after such war and losses, but the social consequences are already felt. Turkey is really a convenient partner for us.”

The founder of the Export Armenia Association, Emil Stepanyan, agreed that Turkey’s main advantage to the Armenian market was one of convenience.

“I would say that Turkey is just ‘comfortable’ for us,” he continued. “It is easy to go there and goods are cheaper, that’s all. Perhaps Turkish goods are more expensive than Chinese ones. But they are delivered faster and cheaper, they can be imported in small batches, and in case of China you have to buy in bulk, because otherwise it makes no sense as the delivery might take months.”

However Gagik Makaryan, the chairman of the Union of Employers of Armenia, said that substituting Turkish goods might prove challenging.

“It will be difficult to find such markets, because there are not many cheap options,” he said. “China is quite far away and the logistics are an issue. As for Iran, not everything is available in Iran and there are some other problems with Iran, those related to business culture. There are also the EAEU countries, which can supply similar products at prices close to Turkish. The fourth option is Europe, but the goods are relatively expensive there. There is also the fifth option - to produce as many goods as possible in Armenia and stimulate domestic production. Much can be produced by local textile manufacturers, and fabrics can be imported from the EAEU countries like Belarus or Tajikistan.”

Makaryan said that the transition would not be simple, but could have long-term benefits for the Armenian economy.

“It is important that it is done the way it is done. It is not about Turkey. We need to encourage and develop domestic production, which will replace imports. This should be one of the strategies for Armenia,” he concluded.

Efforts to promote this kind of output have spread on social media, with the Armenian Brand and For the Sake of Armenia Facebook pages created to promote a wide range of domestically produced goods.

The National Mall in Yerevan, the country’s largest shopping centre, already hosts about 340 local producers, and fashion designer Siranush Nazanyan said that this was a step in the right direction.

Further support was needed, she continued, such as subsidising rents for local manufacturers.

“This would help us to offer more affordable prices for our goods, and it will be easier for the consumers to buy Armenian goods,” she said. “Our consumers love Armenian products and are looking for a diverse assortment. I buy only Russian, Ukrainian and French fabrics for my clothes. Recently Armenian silk has appeared in the market and I buy it too. I have never bought Turkish textile materials.”

Despite the ban, some Turkish shoes and clothes can still be found at markets.

“There are people who change the tag Made in Turkey into Made in China; others import Turkish goods through Russia,” said Ashot Khachatryan, the owner of a small Yerevan boutique. “Yes, there are some businessmen who import Turkish goods to Armenia bypassing the government decree. It is hard to blame the owners of small or medium-sized businesses in the current circumstances, because otherwise they may lose their source of income and then, how to live?"