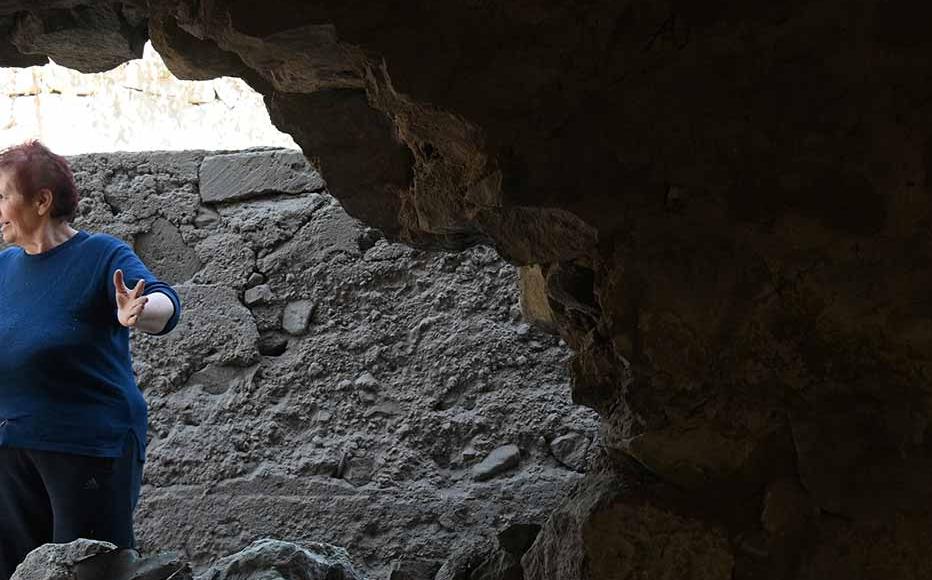 Yepraksya Zadayan's house, in the village of Verishen, just outside the southern city of Goris, was hit by the Azerbaijani armed forces at midnight on September 12, 2022. On September 12-14 fighting between Armenia and Azerbaijan resumed, nearly 300 people died over two days. © Armine Avetisyan 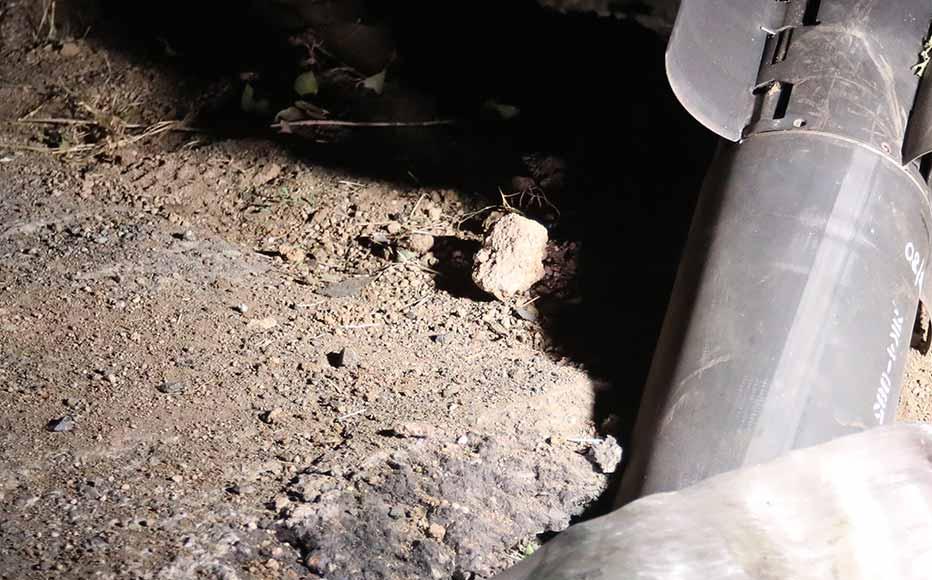 A rocket in Jermuk, a popular resort town in Vayots province. On September 12, Azerbaijani forces shelled inside Armenia, with troops remaining inside its sovereign territory, including on heights around Yermuk. © Armine Avetisyan 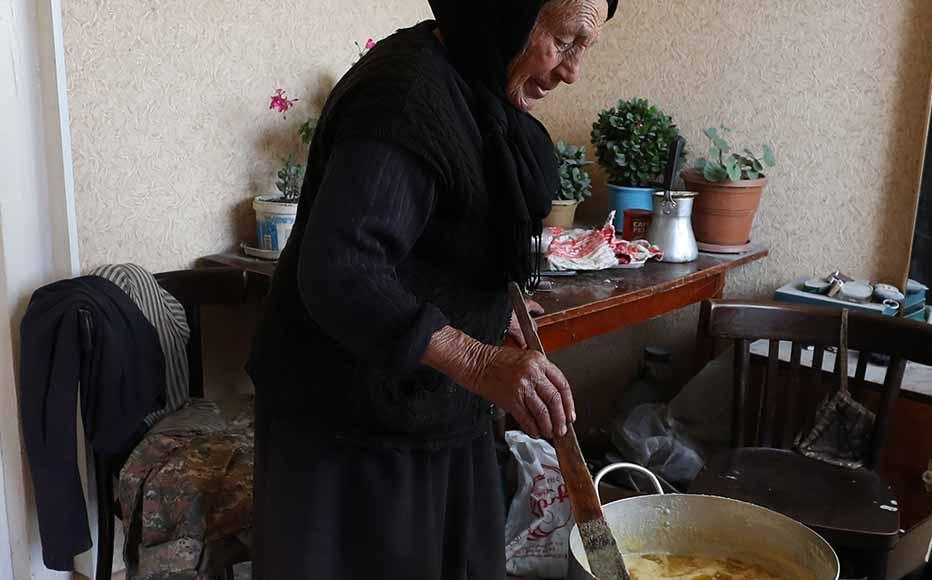 Greta Melkumyan, 82, refuses to leave her native Sotk, a village in Gegharkunis province, close to the Azerbaijani border. At night, she sleeps in her car, not at home. © Armine Avetisyan 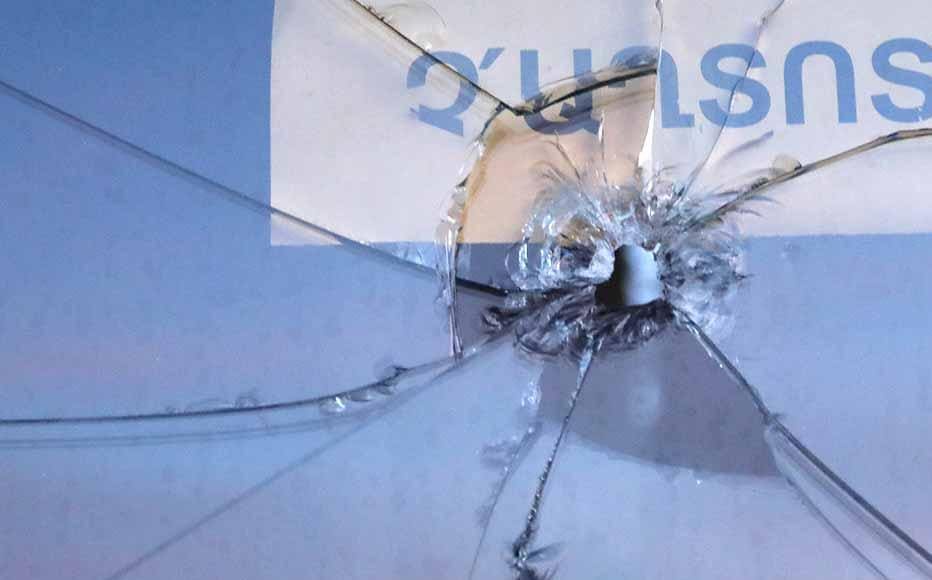 Bullets through the window of a estaurant in Jermuk,a popular resort town of Vayots Dzor province. The sign reads "Do not pollute the area." © Armine Avetisyan
Comment

Armenia-Azerbaijan: The Demise of Diplomacy?

New escalation threatens the outlook for engagement, despite the clear benefits for both sides.

Yepraksya Zadayan's house, in the village of Verishen, just outside the southern city of Goris, was hit by the Azerbaijani armed forces at midnight on September 12, 2022. On September 12-14 fighting between Armenia and Azerbaijan resumed, nearly 300 people died over two days. © Armine Avetisyan

A rocket in Jermuk, a popular resort town in Vayots province. On September 12, Azerbaijani forces shelled inside Armenia, with troops remaining inside its sovereign territory, including on heights around Yermuk. © Armine Avetisyan

Greta Melkumyan, 82, refuses to leave her native Sotk, a village in Gegharkunis province, close to the Azerbaijani border. At night, she sleeps in her car, not at home. © Armine Avetisyan

Bullets through the window of a estaurant in Jermuk,a popular resort town of Vayots Dzor province. The sign reads "Do not pollute the area." © Armine Avetisyan
The link has been copied 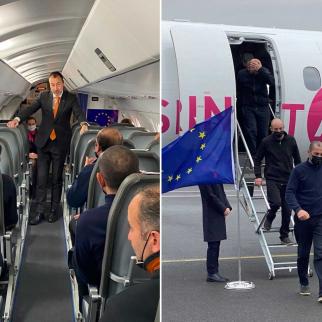 Toivo Klaar, the EU Special Representative for the South Caucasus, overseeing the repatriation of 10 Armenian servicemen in December 2021.

Observers of Armenia and Azerbaijan may have allowed themselves a fresh degree of optimism in recent weeks. The meeting of the leaders of both countries in Brussels on August 31 seemed to mark a welcome return to diplomacy that offered an important promise for progress.  Yet such initial optimism has been abruptly shattered by a resumption of serious fighting triggered by a serious Azerbaijani attack on Armenia.

With both Baku and Yerevan trading accusations, the Azerbaijani attack serves as a painful reminder that distant summit meetings in Brussels are far removed from the reality on the ground.  And this new escalation now tends to endorse Azerbaijan’s reliance on the force of arms and threatens to undermine the outlook for diplomatic engagement.

In the early hours of September 13, Azerbaijani forces launched an attack along a broad swathe of border areas within Armenia.  In what quickly became the most serious combat operation since the end of the 2020 war over Nagorny Karabakh, the Azerbaijani assault was particularly significant.

Unlike repeated incursions and smaller-scale incidents since the Russian-imposed ceasefire of November 2020 went into effect, this attack utilised heavy weapons, with artillery, mortars and high-calibre guns supported by the engagement of military-grade UAVs.  Amid a recklessly indiscriminate mortar and artillery barrage, civilian population centres, border infrastructure and military positions all suffered serious damage and high numbers of casualties.

Another important element of this recent strike was its sustained intensity.  After the attack was launched just minutes after midnight, the bombardment continued largely unabated for eight hours, until a shaky ceasefire was finally reached.  The duration of such a sustained attack was further significant given the logistical requirements involved.

More specifically, in order to maintain such an intensity over eight hours, the Azerbaijani forces needed a large supply of shells, mortar rounds and other ammunition. That logistical challenge must have necessitated at least two weeks of planning, preparation and pre-positioning of stock.  For this reason, it is evident that the Azerbaijani attack was planned well in advance and, therefore, in no way a response or reply to any so-called Armenian provocation.

Beyond escalation, a key development was that the Azerbaijani attack also marked an expansion of the battlespace.  In this context, the geography of the Azerbaijani attack was centred on the targeting of southern and southern-eastern borders areas of Armenia, and logically had little to do with Karabakh.  Rather, this was a dangerous expansion of the conflict, introducing a new bilateral dimension of inter-state war.

And finally, the strategic context of the Azerbaijani attack is an important factor as a direct challenge to the terms of the Russian-crafted ceasefire agreement. Azerbaijan has become quite comfortable in openly challenging Moscow.  Despite the unilateral deployment of Russian peacekeepers to Karabakh, Azerbaijan now holds the initiative and drives the momentum on the ground.

This was also evident in Baku’s attack as a means to both preempt the expanded deployment of Russian border guards and to prevent Russia’s planned acquisition of control over the Armenian-Azerbaijan border.  Each of these moves by Russia follow earlier agreements on the restoration of trade and transport as well as border delineation and demarcation.

Against that backdrop, there is an obvious question of the timing of the attack.  Assessing the broader context, there are three primary drivers behind Azerbaijan’s calculation.

For one, Azerbaijan senses a window of opportunity rooted in the perception and reality of Russian weakness.  Distracted and now overwhelmed by military setbacks in the Ukrainian theatre, the South Caucasus and Armenian-Azerbaijan tension in particular have become more marginal policy concerns for Russia.

A second factor was the recent conclusion of a key agreement with the EU whereby Azerbaijan contracted to supply natural gas to Europe as a strategic alternative to Russian energy imports.  In fact, this agreement only encouraged Azerbaijan as it was seen as a novel way to garner leverage over the Europeans while further strengthening Baku’s stature in Russian eyes.

At the same time, Azerbaijan was also quite correct in judging the international community, weighing and accepting the risks of the reaction from the West.  Azerbaijan was accurate in predicting the employment of the usual “false equivalency” and “inappropriate parity” in the outpouring of diplomatic statements calling on “both sides” to de-escalate.

This immediate response to the Azerbaijani attacks only reinforced Azerbaijan’s self-confidence.  And such supposed expressions of concern tended to confirm that no punitive measures would be imposed on Azerbaijan.

There were some surprises for Azerbaijan, however.  Both the US and the EU - the Netherlands and France in particular - adopted much more assertive stances regarding Azerbaijan.  Such candid positions surprised the Azerbaijani leadership, although these statements have yet to be matched by any concrete action.

A third consideration for the timing of the attack was a return to Azerbaijan’s traditional reliance on the force of arms to strengthen its negotiating position within the diplomatic process with Armenia.

One of the more dauting lessons from the recent Azerbaijani attack is the now obvious absence of deterrence.  With nothing and no one currently capable of deterring Azerbaijan, and as the post-war period is now punctuated more by pronounced uncertainty, the outlook for a logical and reasonable return to diplomacy seems bleak indeed.

Yet over the longer term, there is a degree of justifiable optimism.  The more positive outlook is based on a new, unprecedented post-war reality.  For Azerbaijan, military pressure and aggressive posture are not sustainable, and in fact are already delivering diminishing dividends.  Such meagre results for Azerbaijan’s reliance on force of arms comes at a time where diplomatic re-engagement offers much more, with benefits across three distinct areas.

The first comprises previous agreements and concessions over regional connectivity.  These include agreements on the restoration of rail and roadway connections through southern Armenia, bolstered by the first-ever recognition of the incentives of economics and trade.

A second area of progress centres on the need for a legal, institutional process for border delineation and demarcation, which is now underway.  With Russian involvement, the process of bilateral engagement through an existing model of a commission of Armenian, Azerbaijani and Russian officials, offers the promise of de-escalation based on talks over resolving border disputes.

And the most recent area of diplomatic gains is over the issue of a peace process, with the ultimate aim of formulating an eventual treaty between Armenia and Azerbaijan.  While Azerbaijan seeks to use this area as a means to consolidate and legitimise its gains, for Armenia, the process is more important than the product.  Given the glaring omissions of the Russian ceasefire agreement, this is where and how the status and security of Nagorno-Karabakh can be addressed.

Moreover, the Armenian-Azerbaijani summit in Brussels on August 31, hosted by European Council president Charles Michel, did offer some promise.  Even with the danger of a disconnect between the talks in Brussels and developments on the ground, such European engagement is a welcome change, with facilitation replacing mediation and providing an important platform for the two leaders to engage.  Nonetheless, if this really counts as optimism, it only shows just how low expectations really are.

Richard Giragosian is the director of the Regional Studies Center (RSC), an independent think tank based in Yerevan.