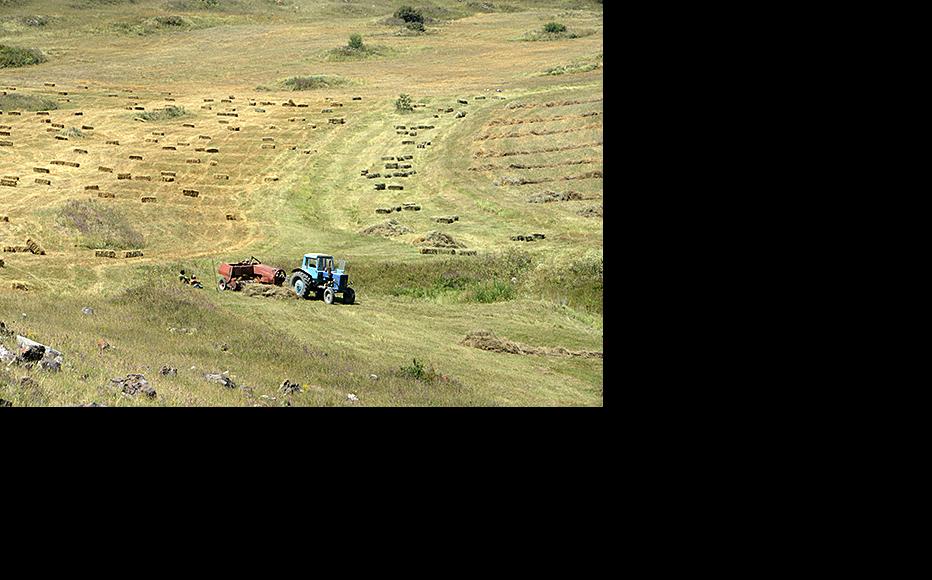 Iranian plans to rent farmland have upset some Armenians. (Photo: Photolure agency)
The link has been copied

From politicians to environmentalists, a wide range of people in Armenia have expressed concern at plans to lease farmland in the south of the country to farmers over the border in Iran.

Opponents of the deal warn it will undermine national security, for minimal gain. Others argue that if the farmers who come are ethnic Azerbaijanis from Iran, that will pose an additional threat to Armenia.

The agreement was signed in January, but only became widely known when the Ecolur environmental group revealed it the following month.

Under the agreement, the local government in Syunik district will lease out 520 square kilometres of farmland for ten years, earning 1.3 million US dollars annually.

The head of agricultural in Syunik region, Samvel Tangyan, said the deal would allow some 50 to 60 villages to earn income from grasslands that had lain unused for two decades.

“Of course, the final decision will be taken by each village council,” Tangyan said. “If they don’t want to do it, then the land won’t be rented out. No one is going to force them. If it is rented out, then the money will go to the villages’ budgets,” he said.

In the capital Yerevan, opposition to the scheme was fairly universal.

Ashot Hovhannisyan, head of the livestock department at the agriculture ministry, expressed strong reservations about it.

“We are categorically opposed to leasing out pastureland to foreign farmers. The pastureland in Syunik region must be used to develop livestock farming there,” Hovhannisyan said.

He said it would be a better idea to help the farmers in Syunik to raise more sheep, which could then be exported to Iran.

Armenia’s justice minister, Hrayr Tovmasyan, said the deal was invalid on two counts. First, only national government was allowed to lease out land without holding an open tender; and second, this was an agreement between two states and would thus need to go through parliament and be signed off by the president.

“These procedures have not been followed, and the document we’re talking about is not a legal or valid inter-state agreement. It therefore places no obligation on either side,” the minister said.

Aghvan Vardanyan of the opposition Dashnaktsutyun party raised the issue in parliament, condemning the secrecy of the deal.

“If renting is profitable for the Iranians, and we have that much spare pasture, why don’t we subsidise [its use] ourselves or offer cheap loans to our farmers?” he asked. “Why are our own farmers and businessmen incapable of developing livestock farming?”

Sarman Shahijanyan, an environmental activist who is an Iranian-born ethnic Armenian, warned against the deal for a different reason.

“We are giving 11 per cent of Syunik region’s territory to Turkish speakers. After the ten years are over, they won’t leave,” he claimed.

Vahram Mirakyan, a researcher in the Centre for Strategic Studies at Yerevan State University, expressed concern in more general terms.

The Iranian ambassador in Yerevan, Mohammad Raesi, said opponents of the deal were exaggerating.
“This is not going to harm Armenia. I propose that we go forward with this project,” he said.

The village of Brnakot is fairly typical of those that will gain the right to lease out their land. It has ten square kilometres of land that it cannot use because it lies too close to the border with Nakhichevan, a region of Azerbaijan separated from the rest of the country by Armenian territory.

Armenian-Azerbaijani relations remain hostile because of the unresolved dispute over Nagorny Karabakh. The war ended in 1994 with a truce but no formal settlement, and borders between the two states remain tense, with sporadic shooting incidents.

The village head, Atom Arakelyan, was optimistic about the plan.

“Let them bring their livestock and pasture it here. Afterwards, they will leave again, but at least our village budget will earn something and we will be able to fix other problems,” he said. “Whatever happens, this land is lying empty.

Gayane Mkrtchyan is a reporter for ArmeniaNow.com