Anger Over Payment Delays to Families of Fallen Afghans

Access to benefits is a key incentive to undertake perilous military service.

Anger Over Payment Delays to Families of Fallen Afghans

Access to benefits is a key incentive to undertake perilous military service. 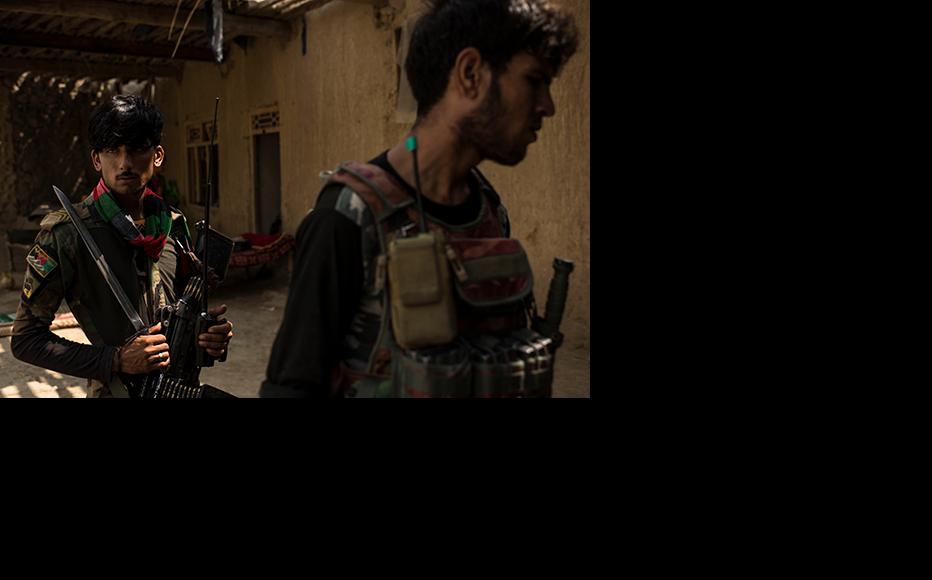 Soldiers with the Afghan National Army at an outpost in Momand Valley. (Photo: Andrew Renneisen/Getty Images)
The link has been copied

In 2012 Karim Dad, a 20-year-old from the eastern province of Nuristan, decided to join the Afghan National Army (ANA).

He was deployed to Helmand, in the south of the country, where he became a sergeant in the engineering team of the Maiwand Corp’s third brigade at the Shorabak training centre.

Less than a year later, he was killed in clashes with the Taleban in Helmand’s Gereshk district.

His brother Gulabuddin told IWPR he had received a call from the Maiwand Corp telling him that Karim Dad had been wounded and asking him to go to a hospital in Kabul the following day.

“When I got to Kabul, I found out that my brother had been killed,” said Gulabuddin, a school guard. “So I took his body and returned to Nuristan.”

Back in their home village of Mamo, Karim Dad’s widow Fatima, the mother of their six-year-old son, told IWPR that she had tried to collect the benefits due to the bereaved family of a soldier.

But in July 2013 she received 1,700 dollars in pension benefits, as opposed to the official sum of 2,600, and there were no further payments.

Each time she travelled to Laghman province to try to access Karim Dad’s pension payments at the Azizi Bank, she was told that the money had not been deposited.

Karim Dad’s mother Daram Bibi said she now felt allowing her son to join the army had been the biggest mistake of her life. She was devastated that her child had lost his life for what she described as a corrupt government.

An IWPR investigation in the Nurgaram district of Nuristan has found at least 18 instances in which the government has failed to pay the full benefits due to the families of servicemen killed in action.

The Kabul government has committed to pay a number of benefits to those killed while fighting for their country, a key incentive for Afghans to join what can be an extremely perilous military service.

Former Afghan president Hamid Karzai issued an order in February 2013 requiring the government to pay so-called death benefits to the bereaved families of every soldier or non-commissioned officer, a sum that can be as high as 3,900 dollars.

These are intended to cover the costs of transporting the body and to cover funeral expenses and comprise an amount equivalent to their last 15 months of salary. Soldiers paid between 188 to 260 dollars monthly.

The government must also pay the last month’s salary of any martyred serviceman or woman to their families in full, irrespective of their period of service.

Retirement pensions are paid to the parents of a dead soldier for the rest of their lives, or to their children until they reach the age of 18.

Mohammad Musa Radminsh, deputy spokesman at Afghanistan’s ministry of defence, agreed that there were problems in dleivering pension benefits to families of ANA soldiers in the east of Afghanistan, especially in Nuristan province.

However, he said that the issue did not fall under military jurisdiction.

“Families of martyrs should complain to ministry of labour, social affairs, martyrs and the disabled (MoLSAMD), not to the ministry of defense,” he said, adding that his department merely provided the relevant documents.

MoLSAMD then opened bank accounts for their relatives to access pension benefits.

But the families involved told IWPR that this process did not always go so smoothly.

Abdul Karim said that his son Ziauddin, 19, was killed in a bomb blast on the Khash Rod area in Helmand in June 2016.

Originally from Nangraj village, he was serving as a sergeant in the Tatheer Company of the fourth infantry brigade in 215 Maiwand Corp in Helmand.

His father, a farmer, said that he had been asked to go to Kabul to collect his son’s body from the hospital.

There, an officer of the religious department gave him 1,800 dollars in death benefits for his son, rather than the 3,200 dollars Abdul Karim said he was due.

After he provided the necessary legal documents to receive his son’s pension entitlements, he received 1,348 dollars rather than the 2,300 he was due.

Abdul Qadeer Bahadurzoy, spokesman for the Maiwand Corps, confirmed that they levied a 478 dollar fee on each annual pension. However, there is no legal basis for such charges.

Two of the young men from Nuristan whose family failed to receive their full pension benefits died while serving in the Afghan Local Police (ALP).

This force emerged from a range of village militias and is separate from the regular national police. Although under the authority of the interior ministry, they are generally drawn from the local community.

However, two young men from Nangraj village in Nuristan both travelled to serve in Zabul province.

Azizullah was just 17 and had only been serving as a policeman for five months when he was killed at a checkpoint in Khan village in Zabul’s Shahjoy district was in October 2014.

His brother Muhibullah, who runs a grocery shop in Nangraj, told IWPR that Zabul police had given him 360 dollars in unpaid wages when he went to Kabul to collect Azizullah’s body.

After the burial, Muhibullah said he returned to Zabul province to collect his brother’s death benefits and to prepare the documents necessary to obtain his pension.

But he said that local Zabul police commander Abdullah Nazari told him that no-one by the name of Azizullah had been registered with his forces.

Shocked that his brother was not listed as a policeman, Muhibullah then travelled to Zabul’s Shahjoy district to meet Dawood, the commander of the checkpoint where Azizullah had died.

“Commander Dawood told me that Azizullah had served with them at the checkpoint for five months, but that he hadn’t legally joined the local police forces, which meant he wasn’t eligible for death benefits or pension benefits.”

Muhibullah said that it was unacceptable that a policeman could serve for five months and be killed while on duty, and for the government to not only be unaware of his existence but also his death benefits to be siphoned off.

“I am a poor and weak person and the government should fight for my brother’s rights,” he said.

Another young man from the same village, Zia-ul-Rahman, also served as a local police officer in Shahjoy district and was killed aged 21 in a Taleban shooting on October 24, 2015. His bereaved relatives also said they had struggled to access any of his benefits.

Nuristan police chief Ghulam Muhiuddin Sarwari said that his office was not responsible for paying benefits to bereaved families.

Sarwari told IWPR, “This is the problem of the Kabul authorities, who are the ones not paying the death and pension benefits to the families of policemen [killed in action].”

MoLSAMD spokesman Abdul Fatah Ashrat Ahmadzai acknowledged that there were problems with paying pension benefits to bereaved families in action in Nuristan province, but declined to provide any further details.