Anger and Jubilation Over Karabakh Deal

With questions remaining over implementation, any move towards reconciliation seems far away.

Anger and Jubilation Over Karabakh Deal

With questions remaining over implementation, any move towards reconciliation seems far away. 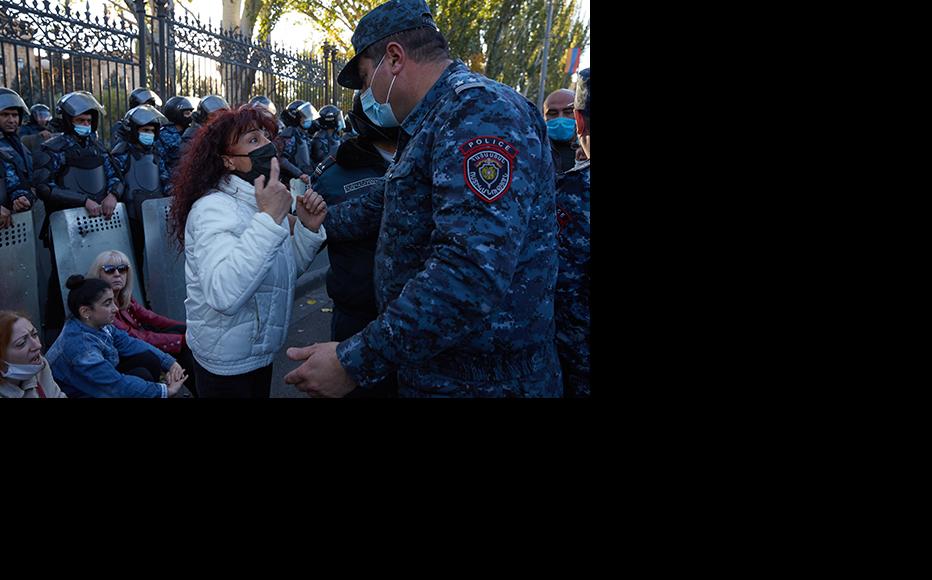 A woman confronts a police officer as protesters demand the removal of Armenian Prime Minister Nikol Pashinyan from office on November 11, 2020 in Yerevan, Armenia. (Photo: Alex McBride/Getty Images)
The link has been copied

As Azerbaijan celebrates and Armenia mourns a November 7 ceasefire agreement that returns large sections of Nagorny Karabakh to Azeri control, peace activists on both sides warn that the next steps are fraught with danger.

Fresh fighting erupted in Karabakh on September 27 in the worst violence seen in the breakaway territory since a 1994 ceasefire ended the war that followed the break-up of the Soviet Union.  More than 1,000 people were killed, including civilians on both sides.

When Armenian Prime Minister Nikol Pashinyan announced the agreement, he stated that “I personally made a very hard decision for me and all of us”.

Although he attempted to end on an optimistic note, insisting that “we fought till the end. And we will win. Artsakh is standing,” the leader of the de-facto Karabakh government Arayik Harutyunyan conceded that “had the fighting continued, the main city of Stepanakert would have been lost within days”.

The agreement sparked protests in Armenia’s capital Yerevan, with angry citizens marching to the parliament to demand Pashinyan’s resignation.

There were very different scenes in Azerbaijan, as people flooded the streets of Baku to celebrate victory, waving the national flag, singing celebratory songs and setting off fireworks.

“It is a historical day for Azerbaijan,” announced President Ilham Aliev. “Today, is the end of the Armenian-Azerbaijani Nagorno-Karabakh conflict. We have just signed trilateral statement between Armenia, Azerbaijan and Russia to end the conflict. We were under a lot of pressure to stop the war but we had to go forward. I have felt the support and trust of Azerbaijani people at all times.”

Azerbaijani conflict analyst Ahmad Alili said that the outpouring of joy was genuine.

“After the defeat of the 90s, Azerbaijani people were hungry for victory and the masses who have been out in the streets [following the signing of the agreement], prove that people are happy,” he said.

Such feelings had been fueled not only by the previous, brief war in April 2016 but also the death of a well-known general, Polad Hashimov, killed in fighting in July 2020. The capture of Shusha, a strategic and historic centre, had also proved particularly emotional, he continued.

Alili noted that, while opposition and human rights activism against Aliev’s autocratic regime had been largely suspended during the war, the signing of the agreement was providing an opportunity for it to resume.

“Some do see this statement as a victory and celebrate it, whilst others are resuming their oppositional and critical views on Azerbaijani governance after being silent - in a way leaving their mission aside for the time being -  during the war. I would say they are expressing it more critically than ever.”

Some in Armenia said that public anger was being exploited by opposition parties and former politicians.

Sevak Kirakosyan, the co-founder of the Mental Potential Development NGO Chit, said he had refused to go to the square to participate in the demonstrations.

“The situation in Yerevan, from what I can see and follow from the posts of my Facebook friends, can be described as a disgraceful attempt to take power by old regimes,” he said. “Disregarding the fact that martial law is still in place - and it forbids any meeting and gathering - disregarding also Covid-19 raging in the country, old players are trying to take the power back into their corrupt hands.”

Kirakosyan argued that the urgency of the protests was fueled by a security vacuum, given that large numbers of the security forces had yet to return from the frontline.

“Of course there are also grief-stricken people who lost relatives, as well as nationalists that try to blame the more than 30 year conflict on the current leader Pashinyan,” he continued, adding, “In my view, the time of war should be over, no sense of revenge should be artificially injected into the public consciousness.

“Only nation-wide referenda and peaceful gatherings across all of Armenia can decide whether the current, legitimate, government stays or leaves, not an angry mob…who destroy state property.”

According to the original November 9 agreement, Armenian armed forces would immediately leave Karabakh, while Aghdam and the villages of the Qazakh region of Azerbaijan previously under Armenia’s rule would be returned.

With Russian monitoring, a new route would be opened from Nakhchivan to Azerbaijan, with peacekeepers immediately deployed to the region for the next five years and a monitoring centre established in Karabakh to oversee the implementation of the ceasefire.

In addition, Armenia is to return the Kalbajar region by November 15 and Lachin by December 1, with refugees and IDPs to return to  Karabakh, and prisoners and the bodies of fallen soldiers exchanged.

However, shortly after the statement was circulated, the reference to the villages of Qazakh returning to Azerbaijan was removed and the point referring to a corridor between Armenia and Stepanakert and Khankendi was changed to Armenia and Karabakh.

Numerous other questions also remain over the deal and its implementation. There is still no clarity as to whether Karabakh will be independent or given autonomy within the territorial integrity of Azerbaijan. Other outstanding issues include the number of cities or regions that will be under Armenian control in Karabakh especially Khojali, Khojavend and Khankendi as well as the Lachin corridor between Armenia Karabakh.

After assigning senior officer Rustam Muradov as the chief of peace operations in Karabakh, the Russian defence ministry released a map of all regional centres where peacekeepers would be based. Some of the peacekeepers have already entered Karabakh, with videos of them being deployed from the Russian city of Ulyanovsk circulating on social media.

But there is also ambiguity around the involvement of Turkey in the mission.

Turkey understands that the Armenian population of Karabakh would not accept the presence of their forces, even in a peacekeeping role. Thus there have been no strong statements from Ankara on this subject, although President Recep Tayyip Erdogan stated that would be involved in the ceasefire monitoring mission.

Maria Zakharova, the spokesperson of the Russian foreign minister, told Echo radio that “considering the fact that Turkey is one of the key regional players, or at least they consider themselves as one, obviously there is an interest to be engaged in this matter and as you know contacts between Turkey and Russia on this subject are ongoing”.

Nonetheless, many in Azerbaijan oppose the presence of Russian peacekeepers without Turkish involvement, recalling reports of mass atrocities previously committed by their troops as they oversaw the exchange of refugees in 1988.

Alili agreed that the introduction of Russian peacekeepers was proving controversial.

“For many Azerbaijanis, expelling the Russian army from Azerbaijan in the early 90s was been one of the most important achievements of Azerbaijan’s independence and statehood,” he said. “For all these years Azerbaijan managed to maintain this image of being independent from Russia quite well and that’s why allowing Russian peacekeepers to enter Karabakh is raising lots of critical voices among social and political activists.”

As for how the deal would affect relations between the two countries, and especially between Karabakh residents and returnees, peace activists expressed great concern over how entrenched hatred and suspicion had become over the years.

Georgi Vanyan, a self-described Armenian “peacebuilder in exile,” has spent many years organising dialogues between the two sides.

“Even if an agreement as such is achieved, we will still have a huge problem to deal with - and that is a culture of hatred that takes its roots from our Soviet past,” he said. “This culture has become all-encompassing and totalitarian, all these years being distilled into the formations of our societies. Starting from school…it has penetrated into the family ideology, supported by intermittent incidents on the frontlines which have led to the sacrifice of young people from both countries.”

He continued, “Peacemaking in such conditions is an unequal struggle against all, because the old methods of  mediation – the old methods are the ones that used to work when both Armenians and Azerbaijanis used to live under the Russian Empire or Soviet rule -  do not work. Conflict has been engraved in the statehood of both countries.

“I believe this is not the problem of nations but governments. A successful peacebuilding project would be in this case a civil society action showing both governments their lack of capacity. And again, they should not prepare us for peace, we should prepare them.”

“I have always been for a dialogue between both nations,” said Hamida Giyasbayli, a peace activist  from Azerbaijan. “Most of all I believe that societies involved in the conflict need to ensure that people who are going to live close to each other feel safe, secure and have their basic human needs met before they start thinking about anything else.”

She said that the current turbulence in both Armenia and Azerbaijan did not bode well for the future of Karabakh, adding, “In order to achieve a lasting peace, we need to make sure that there is stability in both countries before anything else. The more stability in their homes, the more secure people will feel to move forward. “

Giving Voice, Driving Change - from the Borderland to the Steppes
Armenia, Azerbaijan, Karabakh
Conflict resolution, Reconciliation
Connect with us