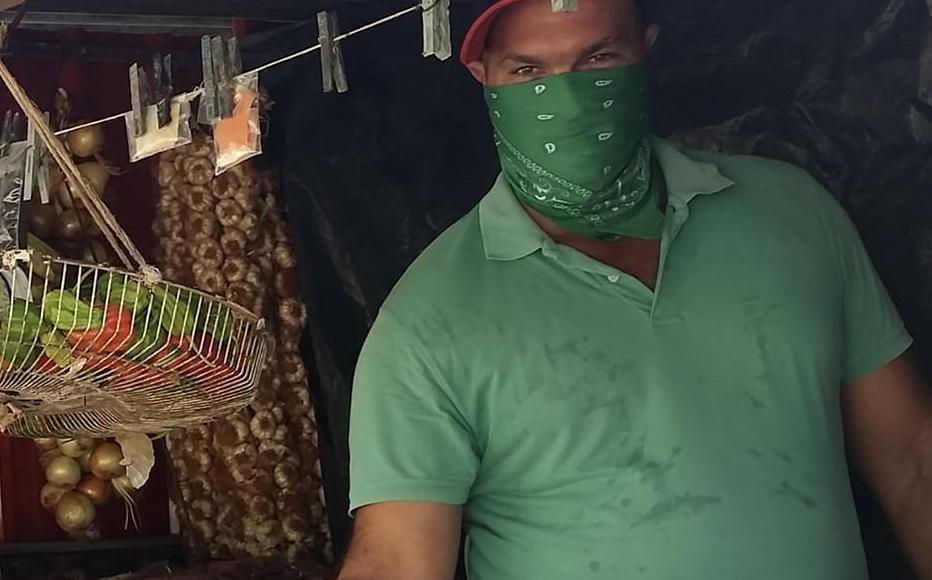 Maikel López has a small fruit and food stall that supplies neighborhoods in Camagüey, Cuba. The stall allows residents not to have to go to crowded state markets. © R. Fernández Street vendor Maikel López was fined with 2,000 Cuban pesos for selling prohibited products to street vendors. The figure is equivalent to three months of the Cuban average wage. © R. Fernández
The link has been copied

Since the start of the coronavirus pandemic, single mother Beatriz – who also looks after her elderly father - has struggled to find enough food and vegetables to feed her family.

The 46-year-old works long shifts, six days a week, as a nurse in a Camaguey hospital and has been unable to spend hours in the inevitable queues outside state-run shops or in official markets.

So Beatriz bought what she needed from one of the self-employed vendors, known as carretilleros, who push their wheeled carts loaded with fruit, vegetables and other supplies around the neighbourhood.

In Camaguey alone, there are more than 300 of these carretilleros, each supplying food to an estimated 100 households - around 20 per cent of the local population.

But with the spread of coronavirus, the provincial government introduced a series of measures to control food distribution and, in theory, curb attempts to manipulate prices and hoard goods.

In reality, this meant a crackdown that has nearly pushed the carretilleros off the streets. In turn, those who rely on them for supplies have been left stranded.

“For me, it has become impossible to get food and vegetables,” Beatriz said.

Such measures instituted by the Cuban government appear to be designed to target the private sector and the self-employed, rather than improve the island’s already inadequate food distribution network.

Most carretilleros, now facing the prospect of fines or confiscation, have stopped work entirely. In mid-July, provincial authorities in Havana announced that 281 self-employed workers, mainly from the food sector, had had their licenses revoked. This marked a significant number, given that in the whole of 2019 the local government issued just 56 licenses for self-employed workers.

This has left many ordinary citizens with no option but to join the long queues in the state-owned Hatibonico market, leading to overcrowding that directly contradicts the global advice for people to socially distance to reduce the risk of infection.

Although the private sector is tiny, it plays a vital role in Cuba’s economy and was previously tolerated by the government.

Carretilleros in Cuba have long existed in a kind of legal limbo. Although they themselves are licensed, the flawed economic system means that they need to routinely engage in illegal operations that the authorities - usually just as routinely – once tolerated.

According to official rules, carretilleros are allowed to buy food products at state markets at the same price everybody else pays for them. They can then resell them around the city with a profit margin of 30 per cent.

However, it is common to see carretilleros selling products such as stock cubes or spices even though it is unclear whether they are strictly allowed to do so. Many carretilleros also buy directly from farmers at wholesale prices, rather than state markets, meaning lower prices for their customers.

Once tolerated, this is no longer allowed to go ahead.

“According to the regulations, all trucks arriving in Camaguey with agricultural products will have to go directly to the Hatibonico market where the cooperatives' representatives will receive and sell them at the agreed prices,” said Antonio Delgado, head of the Inspections Bureau. “The products cannot be sold directly around the neighbourhoods.”

“Although we have all our paperwork in order, we cannot buy directly from the producers in the field,” said Marikel López, who has been a carretillera for eight years.

“What happens then is that not everyone can afford what we offer, but even so, people still buy from us.”

The authorities also imposed curbed access to the state farmers’ markets, restricting carretilleros to two days a week from 6am to 8am and limiting how many products they can buy.

The Provincial Defence Council, part of a network of official local organisations, said that the measures aimed at “putting some order in the market so the population can have access to fruits and vegetables”.

However, it has effectively put the carretilleros out of business.

“The measures put in place by the Provincial Defence Council have made our work impossible,” said Lopez, one of the few carretilleros still doing business. “We can only buy products in the Hatibonico state market because they give us a document that backs us up so we can take our load without the fear of having it confiscated and then being accused of hoarding. And we can only buy on Tuesdays and Fridays, for two hours.”

“There are limits to how much we can buy of each product,” said Lopez, who tries to offer an assortment of products for his clients. “To give you an example: as a self-employed person, I went to the market on Tuesday, queued up, and when I wanted to buy tomatoes, they only sold me 25 pounds because that is the quota. I sold them all in just two hours, now I don’t have tomatoes, and I can’t go again until Friday.”

Recently, the police confiscated all his goods, including food he had bought for his family. He was also fined 2,000 pesos (75 US dollars) for selling rice produced by a friend who does not belong to a state cooperative.

“If we could manage things directly with the farmers, our prices would be lower,” Lopez continued. “We could also ensure our products stably reach the population because the private sector has proved to be more efficient than the state.

“But they don't allow us to do it, and if we even attempt it, then they repress us. What happens is that lots of products rot in fields in the countryside while there is a shortage of food in the cities.”

The severe shortages have been particularly hard for those people whose health conditions mean they should be shielding at home.

Since the pandemic started, Amable Casas, a 63-year-old electrical engineer, has been forced to stay at home with his wife. For him, the carretilleros were a lifeline.

“I can’t go to the state market, because I am now disabled due to a vein thrombosis. That is why when the carretilleros are around my house, I then try to buy lettuces and vegetables. The Hatibonico market is four kilometres away from our home. To get there, I would have to hire a bicitaxi and that would cost me 100 pesos (four dollars), which would make things even more expensive for me.”

Alvaro Nuñez, 65, suffers from cardiovascular problems and had a leg amputated last year. He too is confined to his home, because catching Covid-19 could be life-threatening for him.

“The regulated products in the essential food basket barely lasts one week,” he said. “The government allocates seven pounds of rice a month and per person. We had to complement that with whatever we could buy from the carretilleros, but that was before they prohibited their activity because of coronavirus."

Nuñez, who barely makes a living sewing liners for bicycle seats, said that people like him were suffering because of the government’s ideological opposition to the private sector.

“When the isolation started, we complemented our diet with vegetables we bought from the carretilleros, but with this government's offensive against them, I don't see them around here anymore, and it is now that we need them the most. This is not the first time the government declared war on the private sector.

They say that what they are doing is in the best interest of the population, but people suffer from such arbitrary measures,” he continued. “In this crusade against the carretilleros, we have all become victims of collateral damage.”