After EU Talks, Armenia Swings Back to Moscow

After EU Talks, Armenia Swings Back to Moscow 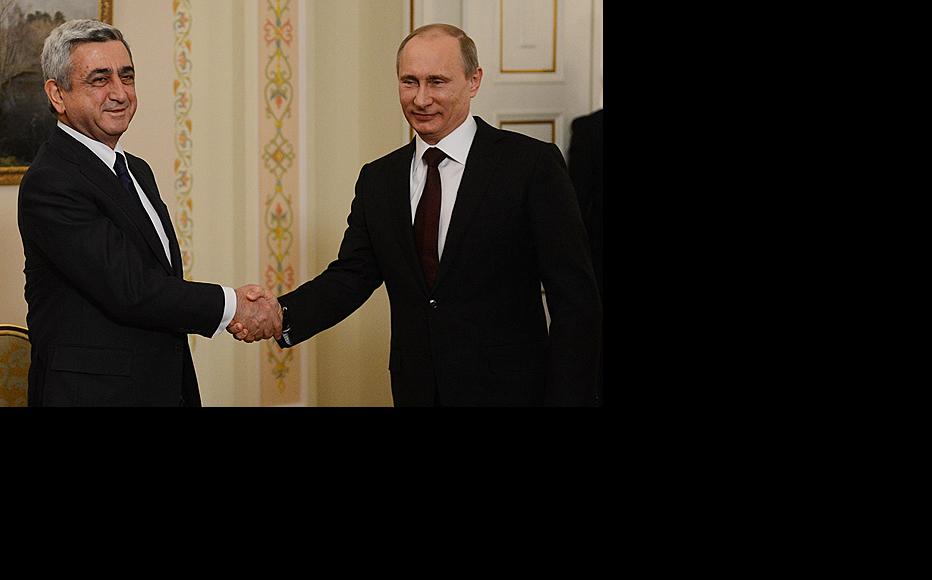 President Serzh Sargsyan’s announcement that Armenia wants to join the Customs Union, a free trade bloc led by Russia, seems to fit with the country’s longstanding ties with Moscow. But it has caused consternation among those who fear the deal will derail plans for closer ties with the European Union.

Sargsyan made the announcement after meeting his Russian counterpart Vladimir Putin in Moscow on September 3. He also said Armenia would like to be part of the Eurasian Economic Union, a more ambitious Moscow-led grouping that is still at the planning stage.

The Customs Union’s current members are Russia, Belarus and Kazakstan. Kyrgyzstan is expected to join next year.

At a discussion held at the Media Centre in Yerevan, Samvel Nikoyan, а member of the ruling Republican Party, said the idea of joining the free trade bloc was the Armenian government’s own initiative, not something that had been imposed on it.

The idea of joining was first floated by Energy Minister Armen Movsisyan in late June. (See Armenia Weighs Foreign Economic Partnerships.) Previously, government officials had dismissed the possibility. In April 2012, for example, Prime Minister Tigran Sargsyan told a Russian newspaper that joining would be “senseless” because Armenia did not share a land border with any other Customs Union member.

As late as August 21 this year, Deputy Foreign Minister Shavarsh Kocharyan said on a local TV station that entering the bloc would mean “saying goodbye to one’s sovereignty”.

On September 5, however, Kocharyan retracted the remark in an interview for RFE/RL, saying instead that “Customs Union membership means a reduction in sovereignty in making independent decisions. That applies to any customs union, and it concerns customs policy and tariffs”.

Kocharyan insisted that the decision had not been forced on Armenia by the Kremlin.

“That is not the case. You’re missing the entire point,” he told his interviewer. “There were many matters that needed resolving….But after comprehensive talks, you ultimately weigh everything up, for and against, and in sum, it is to our advantage”.

Nevertheless, the decision caused some consternation since it followed closely on the successful conclusion of negotiations with the European Union on an “association agreement” which will give Armenia preferential terms of trade. (See Armenia Takes One Step Towards Europe.)

The question as yet unanswered is how the different sets of trade tariffs can be reconciled.

Speaking on September 5, the EU commissioner for enlargement and neighbourhood policy, Štefan Füle, questioned whether Armenia’s association agreement with Brussels would be compatible with membership of the Customs Union. Elmar Brok, who chairs the European Parliament’s foreign affairs committee, said that trying to be part of both free-trade systems was “really impossible”.

Meanwhile, Vigen Sargsyan, head of the presidential administration, insisted that plans to enter the Customs Union would neither block nor delay progress towards the association agreement, which is expected to be signed in the Lithuanian capital Vilnius in November.

Republican politician Nikoyan said it should be possible to do both, given that free access to European markets would only come after ten to 15 years.

“In any case, Europe mustn’t slam the door shut,” he said at the Media Centre debate. “Armenia believes that it needs to combine both these directions as far as is possible.”

The Republicans’ coalition partner, Rule of Law, issued a statement backing the decision to join the Customs Union, in light of Armenia’s strategic partnership with Russia. At the same time, it indicated that the EU was ultimately the better bet as a trading partner. The statement noted that Armenian exports to Russia, Belarus and Kazakstan combined added up to 290 million US dollars last year, compared with revenues of 560 million from sales to EU members.

Opposition parties slammed the president’s announcement, saying they believed it had done serious harm to future trade relations with Europe.

The Free Democrats, for example, warned that “Armenia will lose important facets of its independence such as the opportunity to pursue an independent foreign policy and to function autonomously on financial and economic matters”.

The Dashnaktsyutun party concluded that the only reason the government had gone for the Customs Union membership must have been to secure pledges of Russian support for its own security and that of Nagorny Karabakh. Ever since becoming independent, Armenia has maintained strong security ties with Moscow because of its hostile relationship with Azerbaijan.

Within hours of Sargsyan making his comments in Moscow, a Facebook group had formed calling itself “We are against Customs Union with Russia”. A few hundred members gathered outside the president’s offices in Yerevan to make their concerns heard on September 4 and again on September 10.

“This was a strategic mistake, an important opportunity that has been lost,” Richard Giragosian, director of the Regional Studies Centre in Yerevan said. “A major foreign policy error has been committed that places the entire future of reforms in doubt.”

Giragosian believes that the door to the EU is now “closed but not locked”.

Sergei Minasyan, deputy director of the Caucasus Institute in Yerevan, was more optimistic, saying that Sargsyan’s meeting with Putin did not amount to a “watershed in Armenia-EU relations”.

Arpi Harutyunyan is a correspondent for the Armnews website.