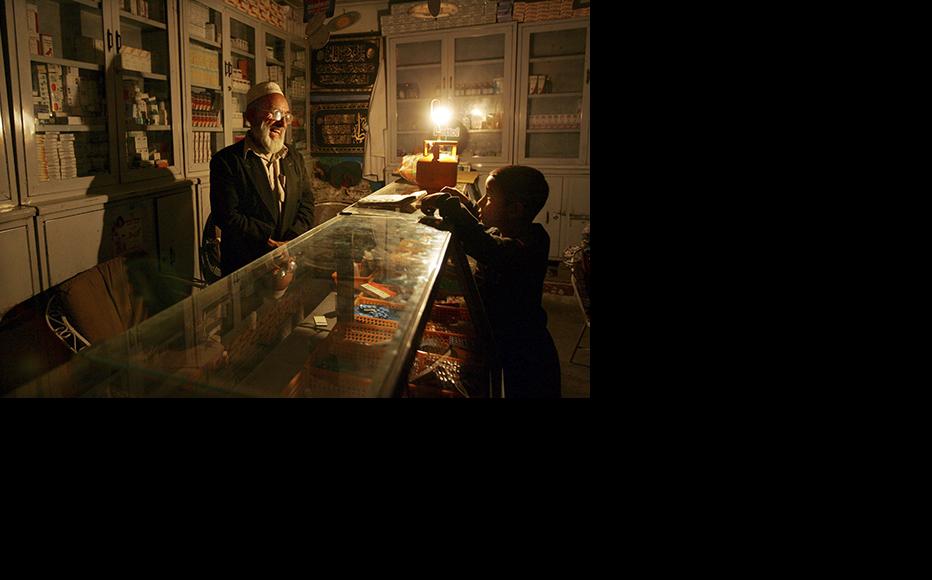 An Afghan pharmacist talks to a young customer. (Photo: Paula Bronstein/Getty Images)
The link has been copied

For the last year Ziaullah, a resident of Jalalabad city in the eastern province of Nangarhar, has been regularly taking the medicine his doctor prescribed to treat his kidney stones.

But his agonising condition had not improved for one simple reason, he told IWPR. It was virtually impossible to get decent medication locally, with a market flooded with substandard or out-of-date drugs.

“My disease has made me tired of living,” he said, explaining that as he lacked the money to go abroad for treatment, he had no option but to take the poor quality medication available and hope for the best.

“Between pain and poverty on the one hand and substandard medicine on the other, I can’t take any more,” he continued. “May Allah almighty help me, these drugs won’t.”

Out-of-date or counterfeit medicines are a major risk to public health across Afghanistan, and a particular problem in provinces like Nangarhar, where a common border with Pakistan provides rich opportunities for smuggling, including substandard pharmaceuticals.

Local people have accused both public health officials and the security forces of either taking part in the illicit trade or turning a blind eye to it.

“Anyone with a sense of humanity who was a good Muslim would not sell substandard medicines to people,” said Azizullah, another Jalalabad resident. “Some staff from the department of public health are involved in this business and share its profit, and this must be investigated.”

Nangarhar officials have acknowledged the problem, explaining that they were struggling to deal with the flow of out-of-date and substandard medicines smuggled into the province.

But Moqadas Miraj, the deputy director of Nangarhar’s public health department, denied any corruption and insisted that they were doing their best to stamp out the illicit trade.

Every month, tonnes of low-quality and out-of-date medicines were collected and destroyed in Jalalabad.

As for those found selling such contraband, Miraj said, “We take legal action through issuing financial penalties, closing down pharmacies and confiscating drugs. Every day our teams carry out inspections across the city, collect expired medicines and burn them.”

Idress Momand, spokesman of the Nangarhar border police, also denied that his forces accepted bribes in return for allowing counterfeit drugs to be smuggled into the country, insisting that they constantly tried to prevent this illegal trade.

“We can’t deny that substandard medicines are smuggled through the border areas, but in areas where our forces have set up outposts no one can smuggle such medicines or any other material into Afghanistan.”

Ehsan Shinwari, head of the Nangarhar Civil Hospital, said that the problem had reached such a level people no longer felt they could rely on Afghan doctors and instead sought treatment in Pakistan wherever possible.

“People don’t trust their doctors, but doctors are not to blame, as they properly prescribe medicines for patients but due to the poor quality of these medicines the treatment doesn’t work,” Shinwari said. “However, if the same medicines are prescribed by a doctor in Pakistan, the patient will respond to treatment and quickly recover, as the quality of medicines are better. We are trying to tackle this problem and we’re collecting out-of-date drugs daily and destroying them.”

Fozullah Kakar, a doctor who has a private practice in Jalalabad, agreed that the substandard medicines in circulation had damaged the reputation of the local medical profession.

He accepted that some doctors were involved in this trade but said that this was only a minority. The real culprits were the drug importers, Kakar argued, because they purposely bought cheap, low-quality drugs abroad to resell for a greater profit in Afghanistan.

Some pharmacists blame the public for not being willing to pay top prices for high-quality medicine.

Faridullah, who owns the Farid pharmacy in Jalalabad, said that patients needed to shoulder some of the blame for the market in inferior medicines since they often sought out the cheapest possible option.

Khan Jan Alokozay, the vice-chairman of the Afghanistan Chamber of Commerce and Industry said that Afghanistan imported 400 million US dollars worth of legal drugs from Pakistan each year.

But Najibullah Sahibzada, head of the Association of Pharmaceutical Businesses in Nangarhar, refuted any suggestion that his members knowingly smuggled low quality medicines into Afghanistan.

He said that all drugs importing companies were registered with the government.

The first major medicine and foodstuff quality-control laboratory, which cost five million US dollars to build, staff and equip, was inaugurated in Kabul in April 2017. But testing all imported drugs will prove expensive, and the smuggling routes are so established that few expect there to be much impact on the illicit pharmaceutical trade.

“If government corruption ends, then the buying, selling and smuggling of substandard medicine will also end, as corruption is enabling this problem,” he said.

Ordinary people say that they remain at the mercy of local pharmacies.

“My small daughter got sick and we took her to a doctor,” said Sayed Mirza, a 20-year-old who runs a grocery shop in Jalalabad’s Eidgah city. “The doctor prescribed some medicine but instead of getting better, she got even worse. When we took her to another doctor, he said that the medicines were just poor quality.”