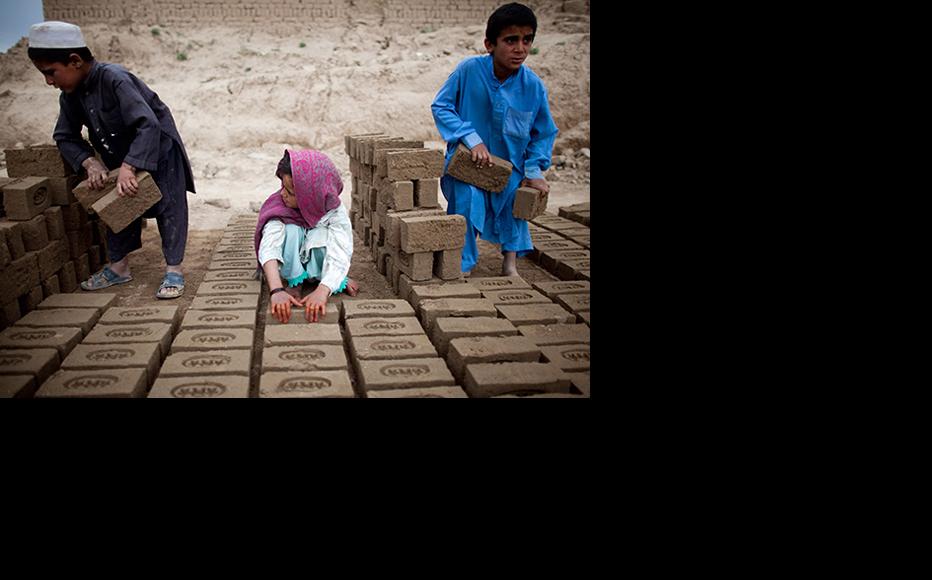 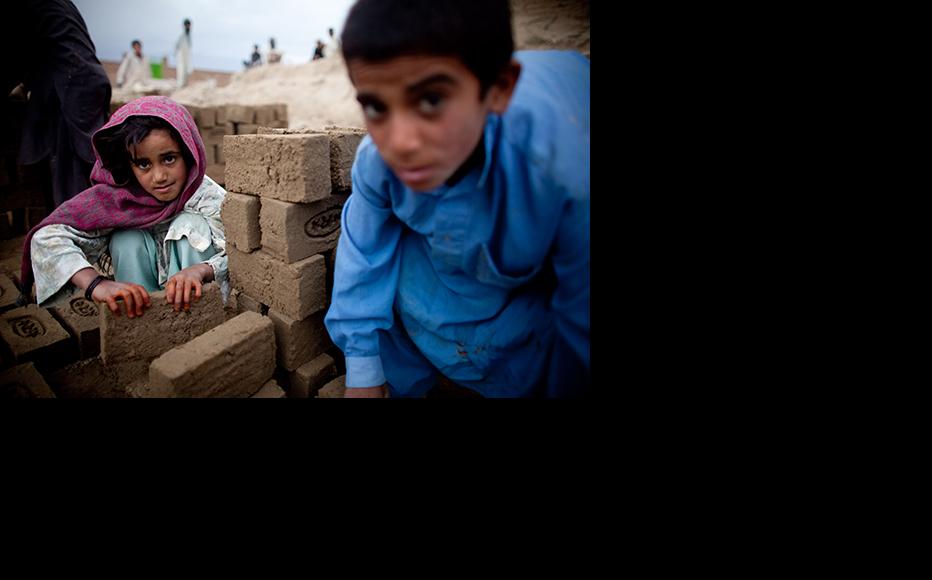 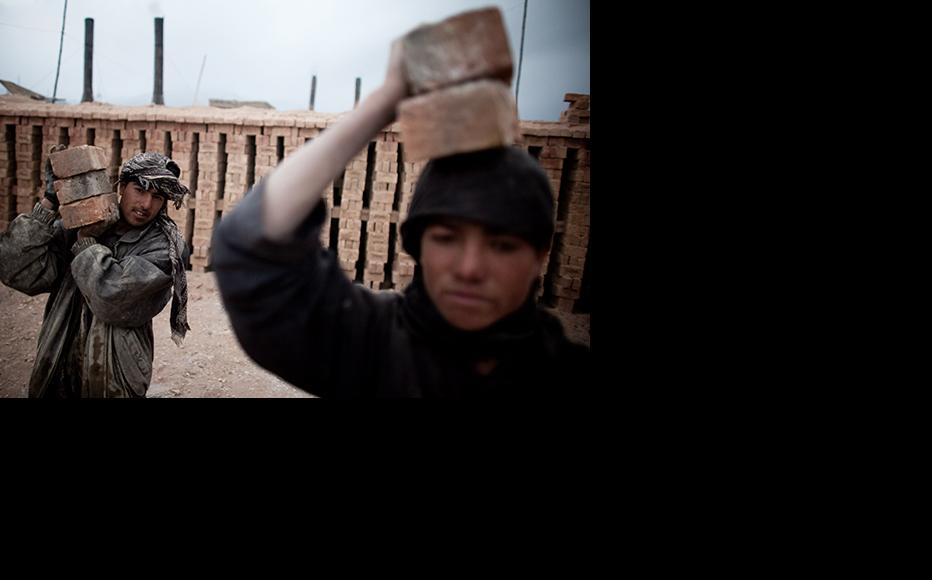 Afghan children sorting bricks at a brick factory in Kabul. (Photo: Majid Saeedi/Getty Images)
The link has been copied

Sajid, 13, has been working in a brick-making plant ever since he was taken out of school three years ago.

He spends 12 hours a day heaving a handcart full of earth from one place to another. His father and four siblings, the youngest of them only six years old, work alongside him soaking, shaping and drying the bricks.

“My family stopped me from going to school because my father had borrowed a lot of money from a brick kiln owner and we had to pay off this debt,” he explained. His 15-year-old brother and three sisters aged 12, nine and six respectively all worked a 12 hour day, from six o’clock in the morning to six o’clock at night.

“I still have many dreams in life,” the boy said sadly. “I liked school very much.  I want to study, but I have to work hard with my father making bricks.”

Sajid is one of thousands of children forced to work long hours at brick factories in Nangarhar after their families borrowed money from brick plant owners.

These debts can take generations to pay off, with entire families living on-site in poor conditions because their main breadwinner is working to pay off the loan.

“I borrowed 3,000 dollars from the kiln owner because my father was extremely sick and I didn’t have any other option,” Sajid’s father Noorullah said. “Now I’m held hostage and I’m leading my life as a slave. I don’t think that I will ever be able to pay off all my debt. I’m sad because even after my death, my son will have to continue working to repay it.”

The 51-year old earns 150 US dollars each month, barely enough to support his dependents.

“I can’t earn enough to feed my family by making and preparing bricks, so paying off the debt is impossible,” he concluded.

There are 120 brick kilns in the province employing about 50,000 workers, according to the brick industry’s Nangarhar union. More than half of these are indentured labourers whose families work alongside them in an effort to help pay off their debts.

One foreman in a brick factory in the Surkh Rod district of Nangarhar province, who asked to remain anonymous, told IWPR, “The kiln owners provide rooms to workers who don’t have homes of their own, but the workers have to take on some work for free in exchange. For this housing, the kiln owners ask the workers to make 1,000 bricks for free each month.”

The situation had been exacerbated by an influx of refugees returning from Pakistan, after Islamabad announced new efforts to induce Afghans to return home. Pakistan hosts some three million Afghan refugees, of whom nearly half are undocumented.

“These days many refugees return from Pakistan without any money, work or homes to go to, and these people are the kiln owners’ ideal victims,” the foreman continued. “If nothing is done to prevent such exploitation, thousands of other families will become slaves.”

Kiln employees complain that although the price of bricks had tripled in in recent years, wages have not risen in tandem.

They are paid five-and-a-half dollars for 1,000 unbaked bricks, which when fired sell for 75 dollars.

Abdul Hakim Sherzad, director of Nagarhar’s public works department, confirmed that there was widespread exploitation in the industry.

“The owners of the kilns are cruel and cause three problems for these workers,” he said. “The first is that the kiln owners deliberately lend money to the workers’ families so as to exploit them. Families owe 2,000 to 3,000 dollars and have to pay this all off before they can start working somewhere else. The second main problem is that the kiln owners ask for 1,000 free bricks in exchange for the rooms provided to the workers’ families and the third problem is that the owners also pay very little for making bricks.”

Nimamatullah Hamdard, the spokesman for the Afghanistan Independent Human Rights Commission (AIHRC), agreed that this was a modern form of slavery.

“The behaviour of the kiln owners is against all principles of human rights,” he added.

For their part, the factory owners dismiss claims that they are exploiting their workers.

“They waste their wages and after spending the money, start badmouthing us,” he said. “We provide the workers with the best facilities. For example, we have provided rooms and homes for them.”

Asked why employees were asked to make 1,000 bricks for free each month in exchange for their accommodation, he declined to reply.

Gul Aziz, who owns a Surkh Rod brick kiln, told IWPR that the 1,000 free bricks were simply a form of rent.

As for the workers’ static wages, he said, “We haven’t increased the price for unbaked bricks because the cost of fuel is so high. The price of a tonne of coal used to be 110 dollars, but now it is 190 dollars.”

Although none of the kiln owners interviewed for this piece agreed to directly address the issue of indentured labour, Gul Aziz said, “[The workers] cannot go anywhere else unless they pay us.”

Sherzad said that kiln owners took advantage of high rates of unemployment to recruit impoverished workers. Employees were forced to agree to take on a large loan otherwise they would not be given work. The terms of these loans were often impossible to meet.

“The kiln owners force workers to borrow money and sign a contract and until this is paid off workers cannot go anywhere else,” he said, adding, “That is how the workers are exploited.”

Sherzad said that this practice was illegal, and condemned the harsh conditions in which children were forced to work.

In Afghanistan, a signatory to the United Nations Convention on the Rights of the Child, it is illegal for minors to undertake hard physical labour that could harm their health. Children under the age of 11 are banned from working at all, and until the age of 18 they should not be employed more than 35 hours a week.

In 2014, the Kabul government included brick making on a list of 19 dangerous occupations prohibited for children.

But these rules have largely been ignored, as have more targeted attempts to improve life for those working in the brick industry.

“Last year an agreement was signed between the department of public works, education, public health, the workers’ union and the owners of the brick kilns,” Sherzad continued. “According to this agreement, the owners of the kilns cannot select a target for the workers; for example kiln owners cannot ask them to make 1,000 bricks a month [for free]. The aim of this agreement was to protect the workers’ children from being forced to take on hard physical labour.”

The agreement also included a promised pay rise, as well as provision for the departments of education and public health to provide classrooms and mobile clinics for the brick factories.

Ghulam Hussain Bewas, AIHRC’s head of children’s support in eastern Afghanistan, said that they had been involved in lobbying for the new regulations.

He added, “We have repeatedly met families who are in debt and have to work in these kilns. They are treated in a way which is against human rights law and principles.”

Mohammad Liyaqat Adil, who heads the All Afghanistan Federation of Trade Unions (AAFTU), said they had staged protests to highlight the exploitation of brick workers, as well as approaching international agencies to put pressure on the Kabul government.

“We have twice asked the International Labor Organisation [a UN agency aiming to set fair labour standards] and related groups to pressurise the Afghan government to take some serious and practical steps to solve these problems,” he continued.

“There are some families where the elder members have died but their children are still being held hostage and exploited,” he said, adding, “The government doesn’t act to implement and enforce international law in the sphere of public works.

Adil said that the practice was particularly hard to uproot due to widespread corruption. The owners of brick kilns were emboldened because they had friends in high places, he continued.

“A person who exploits other people must be sure that he has a strong supporter and that there’s someone who will stand by him.”

Local officials say that there is little they can do without the intervention of central government.

Zabeullah Zemarai, secretary of Nangarhar’s provincial council, told IWPR, “Some of those who were exploited by the kiln owners approached us and shared their problems with us. We informed the governor’s office about these problems. This is all we could do because we don’t have any executive authority.”

Nangarhar governor’s spokesman Attaullah Khogyani told IWPR, “We have not freed any families [from their debts], but we have paved the way for the children of these workers’ families to go to schools.”

With officials apparently unable or unwilling to take action, the local media has stepped in to try and highlight the plight of indentured workers.

Nangarhar journalist Zabiullah Ghazi not only wrote a report about the issue, but also launched a crowdfunding effort with some local activists to try and help affected families.

“When I uploaded my story on Facebook and asked people for help, some sympathetic and compassionate fellow citizens listened to my request and donated money which was used to pay off the debts of some families and free them from slavery,” Ghazi said.

“When we paid off the debts of one family, we told this 10-year old girl that she would now be able to go to school. She was so happy she burst into tears and all the assembled reporters and social activists also began to cry.”

Abdul Rahman is the head of one of the families who had their debts paid off.

“Our life was no different from that of of slaves, but now I am so happy,” he said, explaining that he had been indentured for ten years due to a debt of some 1,400 dollars.

“Now I am free,” he continued. “I sell caps and hats on a street corner in Jalalabad city and I earn about nine dollars in a day.”