Amid accusations of vote-rigging, analysts warn of turbulent times ahead.

Amid accusations of vote-rigging, analysts warn of turbulent times ahead. 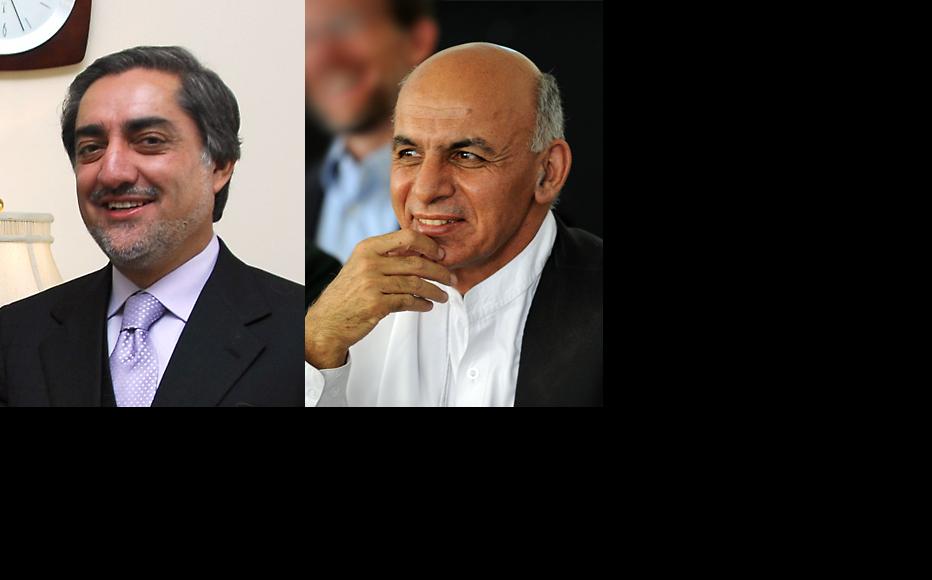 Abdullah Abdullah (left) and Ashraf Ghani Ahmadzai. (Photos: US embassy Kabul/Flickr)
The link has been copied

The electoral crisis in Afghanistan has deepened as presidential candidate Abdullah Abdullah hotly contests the validity of preliminary results announced this week.

Abdullah, a former foreign minister, claimed that massive fraud took place in the June 14 run-off vote in which he stood against former World Bank economist and finance minister Ashraf Ghani Ahmadzai. The second round was needed as none of the candidates in the April 5 election won the required absolute majority.

On July 7, Ahmad Yusuf Nurestani, the chairman of the Independent Election Commission (IEC) told a Kabul press conference that Ashraf Ghani had secured 56.4 per cent and Abdullah 44.6 per cent.

With final results due on July 22, Nurestani stressed that it would be premature to declare a winner.

The announcement nonetheless met with furious protests from members of Abdullah’s Reforms and Convergence campaign team, who took to the streets of the capital Kabul to shoot into the air and chant protest slogans.

At a rally the following day, his supporters tore down a poster of outgoing president Hamed Karzai and replaced it with one of their man, bearing the slogan “Afghanistan’s President Elect, Abdullah Abdullah.”

In an emotional address, Abdullah said he rejected the preliminary results and would never “accept a fraudulent government”.

“We are the winners of this election round without any doubt,” he told his supporters, while stopping short of declaring a parallel government.

“We don’t want civil war, we don't want a crisis,” he said. “We want stability, national unity, not division.”

His rival Ashraf Ghani, whose supporters welcomed the preliminary results with jubilation, told reporters that he regretted Abdullah’s remarks and called on him to respect the law.

He stressed that while he was not afraid of a recount, he would not be bullied.

“We want a united, prosperous and stable Afghanistan,” Ashraf Ghani said. “We expect Dr Abdullah not to push the country into another crisis.”

Karzai, who is constitutionally banned from serving a third term, hailed the early results as another step towards the completion of the electoral process. Calling on all sides to display patience, tolerance and unity, he stressed that the electoral bodies must conclude their work in an atmosphere of complete transparency.

Arguments have continued since the first round, in which Abdullah secured 45 per cent and Ashraf Ghani 33 per cent.

As soon as voting ended in the June run-off, Abdullah began alleging fraud, arguing that the high turnout that was claimed could only have been achieved by ballot-stuffing by his rival’s supporters.

Abdullah made it clear that he no longer trusted either the IEC or the Electoral Complaints Commission, accusing top election official Zia ul-haq Amarkhel, of conspiring to rig the vote against him. Amarkhel has since resigned.

The political stalemate has alarmed the international community, who fear for Afghanistan’s stability after international forces leave later this year.

According to the White House, United States president Barack Obama took the unusual step of speaking to both candidates following the announcement, urging them to find a solution that ensured national unity.

“He also noted that there is no justification for resorting to violent or extra-constitutional means, which would result in the end of US assistance to Afghanistan,” the White House statement said.

Speaking during a trip to India, he warned of the dangers of ethnic strife, noting the sectarian troubles currently experienced by Iraq.

“Iraq has suffered from the failure to have a sufficiently inclusive government in recent years,” he said. “I hope Afghanistan will learn from that failure.”

Afghanistan political analyst Jawed Kohistani said the IEC’s announcement of the preliminary results was misguided, because the allegations of fraud and other claims from Abdullah’s team had not yet been properly dealt with at that time.

However, he added, at least both sides had made their positions clear, “and it now opens the way for the state, civil society institutions and the international community to get involved in the process”.

The risks of failure should not be underestimated, he continued.

“I can see the beginning of a crisis and civil war. I see a vision of the breakdown of the country,” he warned.

He stressed that all parties – Karzai, the IEC, Ashraf Ghani and Abdullah – would share the blame if the election process ended in disaster.

Matiullah Abasin, another political analyst, argued that the IEC was simply acting according to its mandate when it announced early results.

“The commission was acting responsibly because without the announcement of preliminary results, the second stage of the work – that of the ECC – wouldn’t be able to start and the process would be delayed further,” he said. “The public couldn’t tolerate any more delay. People were waiting to hear the outcome of the vote.”

In fact, he continued, the Reforms and Convergence team had started trying to sabotage the political process as soon as polls closed and it realised it had lost. While paying lip-service to legal processes to soothe international concerns, Abdullah’s team was doing everything it could to leverage a measure of power in the next government, he alleged.

“I think Abdullah doesn’t believe what he is saying, because he knows that he has lost the election,” Abasin said.

According to Abasin, Abdullah planning to announce a parallel government early this week, but decided against it for fear of losing moderate supporters.

“Abdullah has realised this, so there is no danger of the situation worsening,” he added.

Kabul shopkeeper Abdul Matin was in no doubt who should get to be president.

“Abdullah stood his ground like a man and said he wasnt scared of anyone. He’s the winner for us. He is the president of Afghanistan,” he said. “I am ready to shed my blood for him.”

Mohammad Munir, a student at a private Kabul university, took the opposite view.

“Abdullah should understand that he cannot take power through force, violence and bullying any more, because the time for that is over,” he said, adding that the public wanted a change of leadership. “People in this country are better informed than they were 13 years ago.”

Nasrin, a resident of Kabul’s Kart-e Parwan district, said there would never be security if Abdullah got into power.

“When we heard firing in the air, we came downstairs from the second floor and gathered in a place where we’d be safe from the bullets. That act showed their true nature,” she said angrily. “They are all common thieves and criminals. They want to make a government for themselves like the [mujahedin coalition of the]1990s. They don’t acknowledge the law.”

Afghanistan
Elections
Connect with us