Experts say a major reason is the influence of a husband or other male authority figure within the family.

Experts say a major reason is the influence of a husband or other male authority figure within the family. 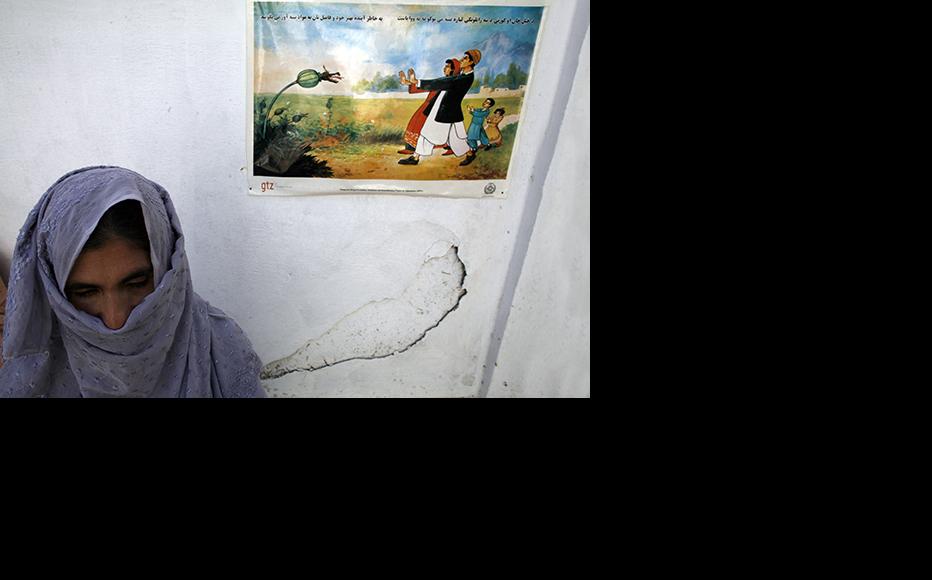 A former drug addict at the Sanga Amaj Drug Treatment Center in Kabul. (Photo: Paula Bronstein/Getty Images)
The link has been copied

Yagana spends her days and nights on the streets of Herat city, begging passersby for money to feed her drug addiction.

She doesn’t know her exact age, although thinks she might be around 18 years old. She looks well into her thirties.

“When I got married, I was very young, maybe 12 years old,” she told IWPR. “I did all the work around the house and got very tired. My brother-in-law noticed this and told me that if smoked some opium I would feel better. As I was so innocent, I started to smoke and eventually became addicted. When my husband realised this, he fought with his brother but it was useless as I was already an addict.”

That was at least six years ago. Cast out of her house, she now sleeps rough and is constantly at risk of abuse.

“I am on the streets most nights and sometimes I fight with people passing by because they abuse me, and even tell me to go with them, which means they want me for sex.”

Her husband has taken her for treatment at an addiction six times, but after each attempt she has gone back to using drugs.

“I told my husband and children not to try again because I can’t stop while I am still alive,” Yagana concluded.

Officials in Herat province warn that rates of female addiction are rising, with one estimate putting the current rate of drug use as high as one in every three women.

Health professionals say that a major reason is the influence of a husband or other male authority figure within the family. Poverty is also a factor, as drugs are cheap and easily available, fuelled by the influx of returning refugees from neighbouring Iran where addiction rates are also high.

Officials have registered between 60,000 and 70,000 addicts in Herat, out of which nearly 8,000 are women, although the real numbers may be much higher.

One of the problems is that accurate figures are hard to come by, although those working in the field say that anecdotal evidence clearly points to a growing problem.

Asif Kabir, head of Herat’s public health department, estimated that addiction rates amongst women could be as high as 35 per cent. An extensive survey was needed to properly assess the situation, he noted, as the last ministry of public health study had been carried out in 2010.

Kabir said that 886 people had come to the Herat treatment centre during the last solar year, 240 of them women.

Ghulam Jilani Daqiq, head of counter-narcotics in Herat province, also said he believed addiction rates among women were rising, highlighting the Kuhsan and Ghoriyan districts as areas of particular concern.

The most recent figures his department could draw on were from a 2012 UN study, which found a female addiction rate of 13 per cent. However, counternarcotic officials said they had themselves witnessed rising rates of addiction in the field, even though budgetary problems meant that they had been unable to carry out their own research.

Herat police spokesman Abdul Rauf Ahmadi said that his forces carried out arrests each day in the provincial capital, but most visible drug use was by men.

“Police investigations don’t often lead to female addicts being brought in,” he said. “Many woman use drugs at home, and this is cause for major research to be carried out.”

“My husband was a drug addict,” she said. “One day he gave me some drugs, so I too became addicted.”

Fatima, however, is one of the lucky ones. Having divorced her husband, she is now 20 days into an addiction treatment programme in an attempt to turn her life around.

Monizha Wahedi, head of the Shahamat addiction treatment centre, noted that women usually began using drugs due to a male addict in their immediate family circle. Once addicted, it was particularly hard for women to seek help as they were so often mostly confined to the domestic sphere.

She also said that rates were rising year on year.

“We have had 20 to 30 female patients and 10 to 12 child patients each month this year, which is more than the numbers last year, unfortunately,” she said.

While 58 women and 43 children had been successfully treated at Shahamat in the first six months of this year, she noted that many others found it hard to give up drugs completely.

“We have had patients who have become addicted again after their treatment and have returned for even the third or fourth time,” she said.

One of the issues is the scarcity of drug treatment facilities available for women.

Ghulam Jilani Daqiq, the head of counter-narcotics in Herat, told IWPR that there were four clinics and two hospitals treating addicts in the province. Just two of the clinics accepted women, each with capacity for 50 beds.

Officials say that this provision will increase when a new addiction treatment centre, currently under construction, is completed in the next few months.

Asif Kabir, head of public health in Herat, said that 510 places will then be made available, with almost half allocated for women.

But Herat provincial council member Mehdi Hadid still accused the government of dragging their heels when it came to action against drug addiction. More treatment facilities were needed for women, as well as greater public awareness about the dangers and consequences of drug use, he said.

Hadid agreed that the main cause of addiction amongst women was the influence of their husbands, adding, “Husbands get their wives addicted to drugs so that they share the burden of blame and so their wives don’t ask for a divorce.”

Dad Mohammad Wahedi, acting director of the Afghanistan Independent Human Rights Commission (AIHRC) in the western zone, said the problem among women was fuelled by the easy access to drugs in the province and the lack of targeted government action.

The AIHRC had done some work to try and raise awareness of the problem, but had had little impact, he continued.

“The government should arrest and punish those who sell drugs,” he said. “If they ignore it the way they have done so far, it’s not only the number of female addicts that will rise but also young people and adults in general.”