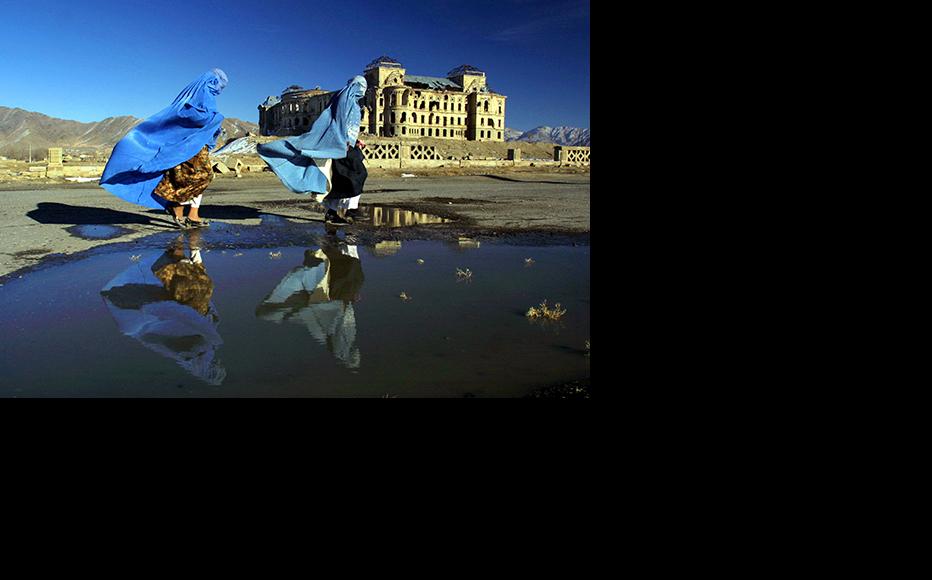 Women in burqas walk in front of the ruins of Darulaman Palace in Kabul. (Photo: Paula Bronstein/Getty Images)
The link has been copied

The ruins of Kabul’s once grand Darulaman Palace, devastated by decades of war, have long been an iconic sight in the capital. An ambitious Afghan-led 16 million US dollar reconstruction project agreed in May 2016 aims to both restore the palace built by King Amanullah Khan in the 1920s and turn it into a symbol of regeneration rather than conflict.

But for the 27 female engineers working on the restoration, the Palace project is also a statement of just what women can achieve in their male-dominated field.

“On one hand, working at this palace boosts our self-confidence and on the other, it’s a good example for other women too,” said engineering graduate Masooma Dilijan, who has been employed at the Darulaman project for the last year.

“It’s been the best experience of my life to work on such a historic site,” she continued, adding, “All the facilities we need have been taken into consideration; for example, our working atmosphere, our security, the proper behaviour of male workers towards their female colleagues and more.”

“I am so happy to work in this project,” agreed Wazhma Khoram, another civil engineer. “The role of women in this project may seem merely symbolic to people, but it’s not true. In fact, women are playing a vital role in the reconstruction of this historic palace.”

This wasn’t about seeking financial gain, she continued.

“We don’t get any special bonuses for working on this project: the benefits we receive are similar to those of an ordinary worker at the urban development and housing ministry.”

Female engineers in Afghanistan say that they can make a real impact in this field, given some basic support.

And perhaps surprisingly, given the many obstacles to women working outside the home in Afghanistan, the percentage of female engineers employed on government projects is comparable to that in some developed countries.

Of these, 105 engineers were women, engaged mostly in engineering, architecture and management.

“The number of female engineers now working in the field has increased compared to past years,” ministry spokeswoman Nelofar Langar said, explaining that the women working at the Darulaman palace mostly focused on design rather than implementation.

The project’s director Syed Zia Hussaini, a senior advisor to the ministry of urban development and housing, explained that the Darulaman development was highly symbolic.

“This is the very first time the reconstruction of a historic and ancient site has been implemented by Afghan engineers and workers, and 25 per cent of those involved in the project are women,” he said.

Designed by German and French architects and constructed mostly by hand between 1919 and 1929, Darulaman was commissioned by a king still revered for ending British influence on the country.

Historian Habibullah Rafe, a member of the Afghanistan Science Academy, said, “King Amanullah Khan wanted to turn Kabul into an attractive city by building this palace so that he could display the real beauty of the capital to foreigner visitors.”

Darulaman was used by the Afghan defence ministry from the Soviet occupation of 1979 onwards. It was severely damaged in 1991 and 1992 during the factional fighting that brought an end to communist rule. It then lay unused for the next two decades.

The hope is that Darulaman can serve as part of a new government quarter as well as a tourist attraction. The National Museum of Afghanistan is situated nearby.

“After the completion of this reconstruction project, the palace will be turned into a national museum and serve as a central, historic building for hosting and welcoming foreign guests,” President Ashraf Ghani told dignitaries when he inaugurated the second phase of the project in December 2016.

Much of Afghanistan’s infrastructure needs major rehabilitation, and Langar emphasised that this process would only be sustainable if women were given the opportunity to play an active role in development projects.

However, the situation becomes more complicated outside urban areas. Attitudes are far more conservative, and the armed opposition controls large swathes of the regions.

Akbar Rustami, spokesman for the ministry of rural rehabilitation and development, said that women were employed across a variety of the agency’s departments.

But cultural sensitivities meant they generally worked in design, quality management and other related engineering sectors, rather than on building sites.

“Male engineers are more active than female engineers in construction work,” he continued. “As you know, there are many security, cultural and social problems in Afghanistan, which means that women cannot work in remote areas of the country.”

On the ground, women were also part of Community Development Councils (CDCs) set up by the ministry in villages across Afghanistan. These are funded to implement the infrastructure or agriculture projects local residents need most.

“In fact, women make up 35 per cent of the development councils of reconstruction projects. But their participation is limited to secure areas, as they cannot work in insecure areas,” Rustami said, adding, “Many of these projects are implemented in villages so that means that there are fewer female engineers in the regions.”

Zakia Wardak, who heads the Engineering Society of Afghan Women, said that the government needed to actively promote and support female engineers.

“We had a meeting with the first lady Lora Ghani last year and we asked her to consider allocating a special budget for businesswomen,” Wardak said.

The society was established to help newly-qualified female engineers find work, and Wardak said that she had also managed to send some young graduates for further study at foreign institutions for further training between 2014 and 2016.

Nonetheless, membership had fallen, she continued. From 90 members in 2013, there were now only 35, which Zakia attributed to their difficulty finding work for their members.

She said that payment was so low that it was very hard to find a worthwhile project.

“I don’t have any problems getting a business license, but it is difficult to get projects nowadays,” she said. “Even some projects that are allocated for women by some ministries are given at very low cost.”

“Men can work even if they don’t have an office, and even if their quality of work is not be that good they still can get projects.”

Conservative traditions also meant that female engineers needed to use intermediaries for much of their direct engagement with the workforce.

“I, as a businesswoman, must have a project manager, a regional manager, a quality manager and other colleagues, but I, as a woman, cannot supervise and monitor my colleagues’ activities in the workplace,” she said, explaining that this was sometimes an insurmountable disadvantage.

“So women don’t succeed, and face many financial problems. Gender discrimination has really made things difficult.”