Prisoners say they are harassed by police officers and justice officials alike.

Prisoners say they are harassed by police officers and justice officials alike. 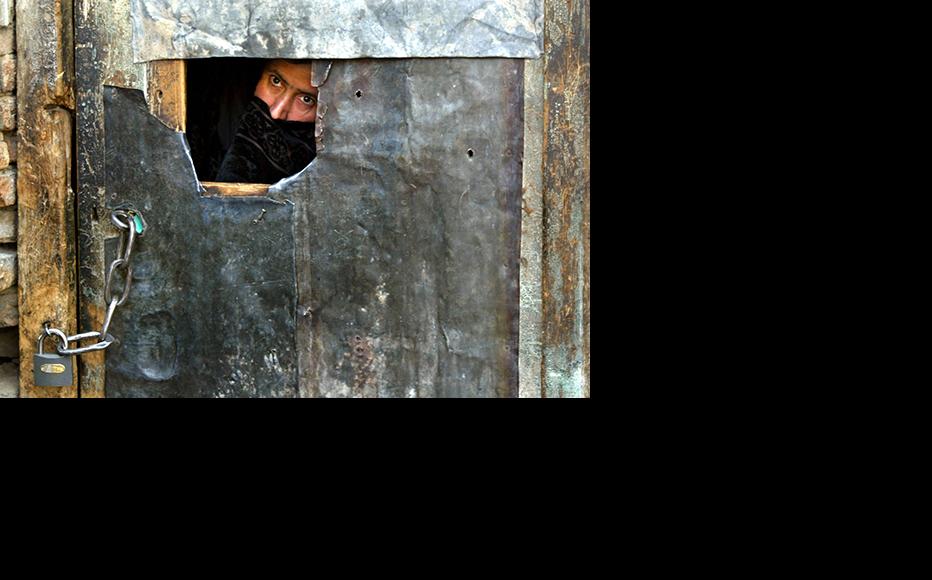 A female inmate peers out the front door as she waits to be released from the women's prison in Kabul. (Photo: Paula Bronstein/Getty Images)
The link has been copied

Zahra (not her real name) is in Kabul Badam-Bagh women’s prison, six years into a 15-year prison sentence  - the maximum punishment for adultery under Afghan law.

The mother-of four said that she had run away with another man after her husband beat and mistreated her. One night in her new home as she slept alongside her partner, police raided the house and took her to the police station wearing only her nightwear.

“On the way to the police station, the policeman in the car was touching parts of my body, they were trying to come closer, when we reached the station one of their officers asked me to go to his room, but I refused to go and warned them if they tried to touch me I will scream and cry,” Zahra told IWPR. “They looked like hungry wolves.  I spent the whole night awake until morning when they took me to Kabul police headquarters.”

When she was later questioned, Zahra said that she received little sympathy.

“During the investigation, the prosecutor humiliated me. He looked at me angrily and without really understanding my problems he told me that God had given me everything, so why had I run away from home?”

Zahra added that she had told a delegation from the Attorney General’s Office that was visiting Kabul police headquarters about the harassment she encountered and was told they would investigate. However, she heard nothing more.

Female detainees have told IWPR that they face sexual harassment and abuse both from police officers during pre-trial detention and from justice officials during investigation.

Fawzia Kofi, the head of parliament’s women's affairs commission, said that her office received dozens of complaints of sexual harassment every week. Each of these cases was logged and referred for further investigation to the relevant judicial bodies.

“Such complaints are registered all the time with our body and people come to seek justice from the National Assembly,” she continued. “This is a serious problem in the judicial sector.”

The Afghanistan Independent Human Rights Commission (AIHRC) also said that they had received numerous reports from women who were harassed or assaulted by justice or security officials.

Latifa Sultani, the head of women’s rights at the AIHRC said, “According to the country’s law, the security forces are obliged to respect the human rights of the accused during detention, and if any woman accused of a crime is arrested, her modesty and rights should be considered.”

She said that female police officers should be the ones dealing with women prisoners and suspects, but this rarely happened as there are so few women working within the system.

Women were deterred from making a formal complaint due to the shame associated with such matters and also because of the assumption that they would not be believed.

Sultani added, “Prisoners do not have the means to document these kinds of abuses and violations or back up their complaints with evidence.”

She recalled a 2013 case in which a prisoner from the Badam Bagh’s women’s prison had complained to the AIHRC that a judge had sexually harassed her. Sultani said that although the AIHRC has passed the complaint on to the relevant authorities, they had heard nothing more.

Even women not suspected of any crimes who are brought into police stations for their own protection say that they are harassed. Sahar, now 15, was kidnapped three years ago in Kunduz province and held captive by armed militia in Takhar province. During her ordeal she was raped several times and is now pregnant.

She said when, in late December 2016, she was rescued from the armed gang she was taken to Takhar police headquarters before being transferred to a safe house.

However, in the several days she spent at police headquarters, she said that she was sexually harassed by police officers.

“One of the policemen asked me several times to sleep with him,” Sahar continued.

She said that she had complained to Takhar police headquarters and was only promised by the police chief that he would respond to her complaint.

Takhar provincial police chief Noor Mohammad Hakim said that although he was not in his position at the time of the alleged incident, he would now launch an investigation.

Mohammed Qais Fasihi is an administrative deputy at the department of prisons and detention centres, part of the ministry of interior.

He said that there were currently 420 women serving prison sentences in Afghanistan, either for murder or for “moral crimes,” a loosely-defined category which encompasses actions such as running away from home A further 410 women had been charged and were under investigation.

Access to detainees in Afghan prisons, particularly women’s facilities, is hard to obtain. IWPR spent a month requesting official permission from the minister of interior himself, and was only allowed to interview three inmates. Officials insisted that they had to be present for any other prisoner interviews.

Officials seem to be unaware of the phenomenon of sexual harassment, or say that such abuse no longer takes place.

Najib Danish, the deputy spokesman of the interior ministry, said, “Right now we don’t know of any such cases, although there have been some in the past. For the time being, whenever there is an alleged incident, the ministry of interior is committed to investigate it.”

Jamshid Rasouli, a spokesman for the attorney-general’s office said, “We haven’t seen a case of prosecutors making unlawful demands from women prisoners recently, but if such a thing has occurred the attorney-general is committed to investigate and bring the perpetrators to justice.”

“A woman went to the department of justice to make a complaint but [he] raped her”. Stanekzai said, adding that Qureshi was convicted by a Logar court and sentenced to 20 years’ for the rape. He is currently in detention in Kabul’s Puli-Charkhi prison and is appealing the decision.

Some activists say that the system simply does not function well enough to exclude such abuses. Widespread corruption meant that perpetrators felt they could act with impunity.

Abdul Qader Adalatkhwa, a member of the Supreme Court, declined to comment over claims that judges themselves had sexually abused women during the investigation of their cases.

However, he confirmed the existence of graft within the country’s judicial institutions, adding, “Corruption is the most serious challenge to the government and people of Afghanistan.”

Shahla Farid, a professor at Kabul university, said, “A good option to put an end to such these human rights violations is to create real transparency in judicial intuitions as well as accountability before the law.”

Jamila (not her real name) is serving a sentence for murder in the Kabul prison. She said that when her case was sent to attorney general, prosecutors had asked her family for 900,000 Afghani, but they could not raise the money.

As a result, she said, she was convicted and sentenced to 15 years in prison.

“Corruption is very high,” she said. “Whoever has money ensures their release by paying the prosecutor. But if the girl is beautiful, they will put her under pressure to fulfill their sexual desires.”

Jamila said that although such abuse was common, few female detainees would admit to it. For many women, it was just part and parcel of their progress through the justice system.

“There are many girls here in Kabul’s women’s prison who have improper demands made of them by the prosecutors,” she continued. “They won’t want to give interviews or talk to you about this, because they know that the prosecutors won’t be questioned and in fact it will just lead to more harassment and abuse for themselves.”