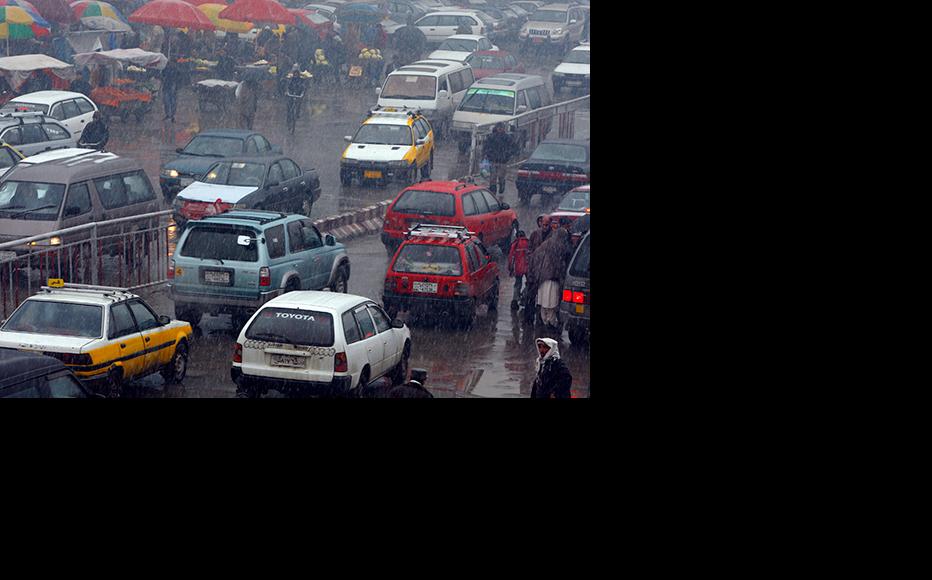 Road conditions in Afghanistan are often dire and many drivers are unlicensed. (Photo: Paula Bronstein/Getty Images)
The link has been copied

Officials in Zabul say that a crackdown on dangerous driving in the southern province is showing real signs of success, with the number of reported accidents down by as much as a third.

The free, two-week long course is designed to improve safety and raise awareness of traffic laws.

Across Afghanistan, the licensing system is chaotic and roads remain perilous. Widespread corruption in road traffic departments means that officials can be easily bribed and licenses bought, and many drivers have never passed a test.

Abdul Ahmad, director of Zabul’s traffic department, told IWPR that the situation was exacerbated by poor road conditions and the threat of insurgent attacks.

“In more dangerous areas where there’s a risk of being attacked motorists often drive too quickly,” he said.

“They accelerate through that area and sometimes, because of the poor condition of the road surface, they end up having an accident and rolling the car.

“Vehicles such as taxis and buses which ferry lots of passengers between provinces are often the ones which end up having accidents. They have the most casualties.”

Zabul, with a population of nearly 300,000 people, is linked to Kabul in the north and Kandahar in the southwest by Highway 1, also known as Afghanistan’s ring road.

Ahmad said that for the last two years his department had been leading a push to cut traffic accidents on all routes through the province.

Officials had been instructed to demand drivers’ licences during traffic stops and were able to issue fines to motorists unable to produce valid documentation.

“Anyone over the age of 18 can take this course and if they pass they’ll be provided with a licence,” Ahmad said. He added that the majority of drivers in Zabul did not possess a driving licence.

Reviewing traffic accident figures for Zabul province, Ahmad said 28 people had died and 67 had been injured in a total of 47 incidents reported between March 2016 and 2017.

Figures for the equivalent period between March 2017 and March 2018 suggested a significant reduction, with 18 people killed and 55 injured in a total of 29 accidents.

Ahmad emphasised, however, that none of these figures - including the apparent drop in accidents - could be entirely accurate given how many incidents went unreported.

Sayed Abbas Hashmi, director of Zabul’s provincial hospital, also stressed that figures were unreliable due to so many undocumented accidents. He said that his staff had dealt with 319 patients wounded in traffic accidents last year and 348 the year before.

“Most of the time traffic accidents are not reported and victims may not even be brought to hospital,” he said.

Corruption is another problem. Abdul Malik, a traffic officer in Qalat, told IWPR he believed that many government officials were among those motorists guilty of reckless driving.

He claimed he and his colleagues were powerless to act in such cases.

“Most of the time the traffic laws are being broken or ignored by state vehicles carrying local officials,” he said. “They’ve no regard for the rules of the road and they drive at high speed. There have also been instances where officials have let their teenage children borrow their car and this has led to accidents.

“We can only implement the law when it comes to normal people. If we stop officials and ask to see their licences, then they threaten us and demand we let them go.”

But locals say that they are happy about the initiative, and those who have taken the two-week course say they found it extremely useful.

Muhibullah, a 27-year-old resident of Qalat city, told IWPR that he now understood which motorist had priority when on a roundabout, and he had also been given advice on basic vehicle maintenance.

“I now know about the different traffic rules, signs and signals,” he said. “I was taught how to drive safely in crowded areas, what to do if I ever have an accident, and how to maintain my car.”

Others say that the crackdown is much-needed.  Qalat resident Sayed Agha, 31, recalled how he had been driving with friends along Highway 1 three years ago when he had a crash and his car was rolled.  One of his friends was killed and another paralysed.

“I still get flashbacks to that terrible accident,” he told IWPR. “It really scares me and makes me think.

“Anyone who drives must learn and understand the rules of the road. They must drive safely to avoid such accidents and the government must enforce the law.”

Amir Mohammad, 50, who lives in Shahjoy district, also welcomed the clampdown and said that parents in his neighbourhood were constantly worried about their children being run down on their way to school.

“I’ve seen with my own eyes schoolchildren being killed or injured due to reckless driving,” he said. “Sometimes you can see children as young as 12 or 14 driving in the city, but traffic officers do nothing about it.”

Ahmad insisted his department had a zero-tolerance policy towards underage drivers.

“Under no circumstances do we issue licenses to minors and nor do we allow children to drive in the city,” he said.

“Whenever our officers sees such cases they stop the car and impound it. We do not return the vehicle unless we receive a firm guarantee that children will not be allowed to drive it again in future.”

However, not everyone is keen on taking the course, despite the clampdown on unlicensed drivers. Noor Ahmad, 25, who lives in Shahr-e-Safa district, said he had twice been fined for driving without a license.

“Previously, traffic officers never asked to see my licence but now they sometimes do,” he said. “Sometimes they don’t mind that I don’t have one and sometimes they fine me four US dollars.”

But he said he had no plans to take the new course, arguing that two weeks was too long to take off work to attend the course. In the remote districts where he usually drove, Ahmad continued, there were too few traffic police for drivers to feel concerned.