Versatile leaves can be used for eco-friendly matting, dishes and more, but the trees are disappearing for use as firewood.

Versatile leaves can be used for eco-friendly matting, dishes and more, but the trees are disappearing for use as firewood. 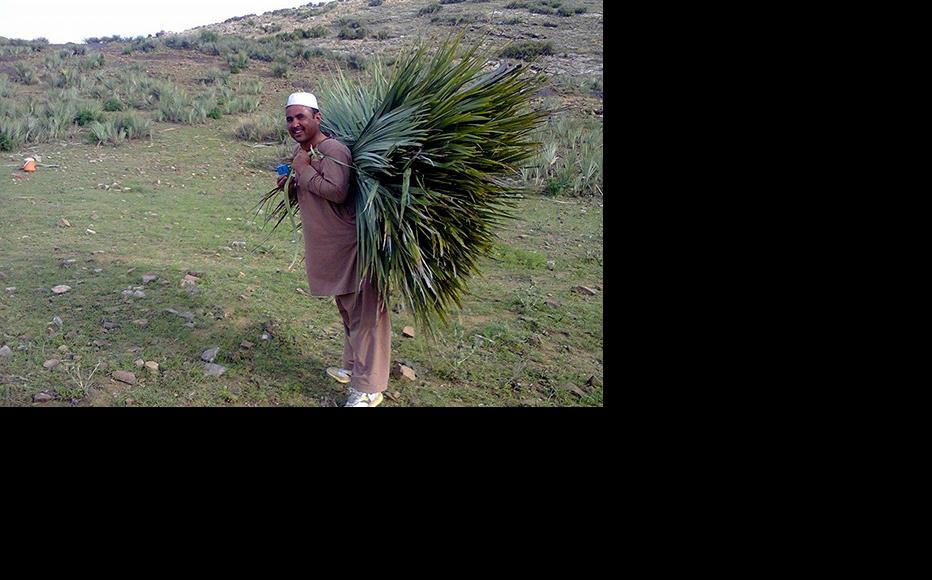 In the shade of a tree in front of his house, 55-year-old Qasem told his children to be quiet while he took a nap.

A pillow under his head, he made himself comfortable on a bed made out of the palm leaves used to make a range of household items in the Khost province of southeast Afghanistan.

“I have a metal bed at home. I have carpets as well, but they get very warm in hot weather,” said Qasem. “A palm bed is cool and one feels comfortable on it. Also, the bed and the matting can be washed frequently.”

Smiling, he added, “Doctors say diseases have increased ever since plastic carpets and other items came onto the market.”

Making things out of the leaves of the Mazari palm tree has long been a speciality of this province, where the plant grows wild in the mountainous terrain.

However, producers and sellers of traditional palm-leaf handicrafts say they are struggling to make a living from their work, and accuse the government of neglecting their industry. Some want Kabul to impose high taxes on plastic imports, while others believe it should help create an export market for their handicrafts.

It is the Mazari palm’s versatility that makes it so valuable. It is used to make beds, chairs and couches as well as smaller items such as dishes for bread, fruit and vegetables which keep food fresh.

Khost resident Sayed Alam said most of his household items were made from palm leaves.

“Palm items are much better than plastic ones. Food rots very fast in plastic dishes, but it doesn’t in palm leaves,” he said. “Matting items are cheaper than plastic ones, and they are also stronger; they don’t break quickly. Since they allow air to circulate, they preserve everything in good condition.”

Power shortages mean that there are few electric fans, so people weave hand-held fans to cope with the scorching heat of summer. Palm leaves can also made into prayer mats and ornamental items.

Both men and women are employed in what is generally a cottage industry, with goods exported to other Afghan provinces including Paktia, Nangarhar, Kandahar and Helmand and abroad to Pakistan. That makes it an important part of the local village economy.

Khawar Amiri, who heads the department for women’s affairs in Khost, said that 80 per cent of women depended on palm weaving for an income.

She said her department organised two exhibitions of women’s handicrafts last year and planned to do the same this year, too.

“We have held many meetings and public awareness programmes about this,” she explained. “This sector benefits women who have no breadwinners, because the costs are low and the profits high.”

Khost resident Rasul Bibi turned to palm handicrafts after her husband divorced her and her son was imprisoned, leaving her family with no male earners.

“My two daughters and I make items out of palm leaves. We support ourselves through our own efforts. We don’t need anyone's help,” she said. “We make trays, ornamental items, brooms and other things and we earn up to 250 [US] dollars a month.”

Palm-leave products form a traditional part of a bride’s dowry in this part of Afghanistan.

“As soon as a girl is engaged, she starts making these items, or else she buys them at the market or from well-known producers of palm-leaf goods in her area. If she doesn’t bring such items with her to her in-laws, the villagers and relatives will view her with some disrespect,” he said.

Khost shopkeeper Abdul Wahed said woven items were in high demand amongst internationals in Afghanistan, as well as making a popular choice of gifts among expat Afghans living in Europe or America.

“There are people who take palm dishes, trays, ornamental items and sandals to foreign countries like Germany, Italy and France,” he said. “They sell them for good money there. If the government helps us, I am sure we will be able to find international markets, but it is very negligent in this regard.”

Nawab Amirzai, head of the Khost chamber of commerce, said that despite his office’s efforts, it had not been possible to popularise palm-leaf items abroad. He laid the blame for this with local traders and producers.

“They don’t register with the chamber of commerce. They don’t have a union or anything to share their problems. They work haphazardly. For this reason, their voice is rarely heard,” he said.

Amirzai noted that large amounts of palm-leaf products were sold to other provinces of Afghanistan, and up to three truckloads went to Pakistan every week.

Khan Jan Alokozay, deputy chairman of the Afghan Chamber of Commerce and Industry, agreed that palm products were an important export item and could be a way of reducing unemployment. He too called on producers to organise themselves and help chamber of commerce organise exhibitions and seek new markets abroad.

The Mazari palm grows up to four metres tall and thrives in dry, mountainous areas of Khost, particularly in the Zazi Maidan, Baak, Sabari and Alisher districts.

In some places, stocks are running low in the wild as villagers chop the trees down to use as firewood.

Abdul Ghias Jalatzai, director of the environmental protection agency in Khost, said the Mazari palm was not only important for the rural economy, it also helped prevent soil erosion.

“The structure of these plants is such that they can reduce the damage inflicted by flash floods,” he said, adding that his agency had spoken to tribal elders around Khost and they had promised to help protect the palms.

Officials at Khost’s agriculture department say public awareness campaigns to prevent the plants being destroyed have had only limited success.

Departmental head Naqib said a project was being run to cultivate the palm trees on plantations.

“We have planted them on farms to protect them. If we get a result, it will be a great success,” he said.

Ahmad Shah is an IWPR reporter in Khost, Afghanistan.

Pakistan, Afghanistan
Environment
Connect with us